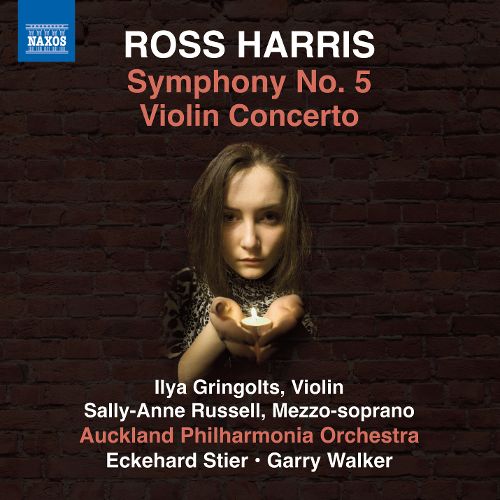 New Zealand's Ross Harris (b. 1945) is a happy surprise of a composer for me. The Naxos (8.573532) CD at hand gives us poetic readings of his Violin Concerto  and his Symphony No. 5, two expressionistic gems handled beautifully by the Auckland Philharmonia Orchestra under Gary Walker for the former and Eckehard Stier for the latter. Ilya Gringolts sounds inspired in the solo violin role and mezzo-soprano Sally-Anne Russell is glowingly moody in the solo vocal part of the Symphony.

Harris adroitly negotiates the terrain between tonality and atonality in both works. The Violin Concerto (2010) gives the soloist lyrical-mysterioso passages alternating with a bracing turbulence and the orchestra follows and expands the moods in ways that remind favorably of Berg's Concerto and its depth without in anyway mimicking it.

The Symphony No. 5 (2013) sets three poems of Panni Palasti that recall her immersion in wartime Budapest during the Nazi siege there during WWII. Opening and closing adagios of austerely striking beauty frame directly communicating settings of the poems, which in turn are set off by two vividly depictive scherzos that portray wartime violence and horror.

Harris is a composer of substantial orchestral nuance and freshly thematic substance. The two works paired in this release enjoy dramatically moving and crisp readings that set a high benchmark.

Harris is a modernist of real stature! Highly recommended.
Posted by Grego Applegate Edwards at 5:18 AM