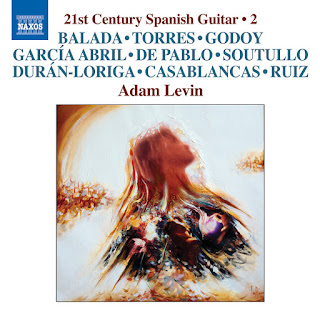 Spanish guitar technique has evolved over the centuries such that there is now a cohesive body of ways of attacking and/or simultaneously sounding one or more of the nylon strings. In our century those techniques continue to expand in breadth at the same time as the compositions reflect the vast development of melodic-harmonic possibilities present in the overall classical music oeuvre. There seems in fact to be a reflowering of the music today, a most welcome development.

We can hear nine examples in 21st Century Spanish Guitar 2 (Naxos 8.573409) played exceptionally well by guitarist Adam Levin as the second volume of a projected four in all. Eight of the nine are in first recordings. All were composed in the present decade.

These are compelling modern abstractions with traditional folk and improvisational feels mixed in with bold dashes of the contemporary. All but one were written especially for Levin and are dedicated to him. He returns the favor with dedicated, intricately realized performances that do full justice to the music.

This is indispensable listening for anyone interested in modernity in general and the Spanish guitar in particular. Volume two alone is a landmark collection in itself. Do not miss this one!
Posted by Grego Applegate Edwards at 5:18 AM