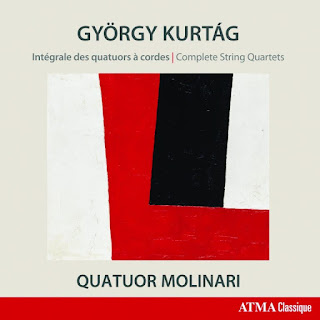 When it's a matter of deserving living high modernist composers, Gyorgy Kurtag (b. 1926) belongs up there though he does not always get his due. Enough of his music, happily, has seen the light of day in the recorded medium that we can gauge his merits regardless.

Today's selection is a good example. His Complete String Quartets (ATMA Classique ACD2 2705) comes to us in a major new recording by Quatuor Molinari.  His quartet work is sufficiently terse and concentrated that the entire output fits on a single disk, covering the period from 1959 through 2009. Like Webern, Kurtag does not provide a single superfluous note. His complex and highly colored string language is as dense and purposeful as it is memorable and alive.

Quatuor Molinari presents the works in chronological order and puts in all the precision and expressivity the works demand. You can hear a progressive movement beyond serialism to something more intensely personal.

The "Quartet No. 1, Op. 1" (1959) was a breakthrough from a frustrating period of blockage. He transcended it by working with only two or three notes at a time. There results a music of great intensity.

The "Hommage a Andreas Milhaly, Twelve Microludes, Op. 13" (1977-78), uses quotations and an even more terse approach to create the twelve miniatures. "Officium breve in memorium Andreae Szervansky, op. 28" gives us a radical brevity of 15 movements in three minutes.

The "Aus der Ferne III" (1991) and V (1999) are from a series of  tributes to the music publisher Alfred Schlee, who among other things heroically kept numerous modern music scores out of the hands of the Nazis (and sure destruction) in WWII. They show an increasing freedom of language, notably cello pedal tones and "literal" depictive expressions.

"Hommage a Jacob Obrecht" (2004-05) pays tribute to composer Jacob Bali and his fondness for Renaissance polyphony with a deft conflation of early music with the modern.

Finally "Arioso" (2009) pays tribute to Walter Levin and the LaSalle Quartet, who staunchly advocated new music composers for more then 40 years. The music is "in the manner of Alban Berg."

And that concludes the program. By concentrating on just the Quartets and presenting them chronologically Quatuor Molinari gives us pinpoint insights into the development of Kurtag's music from a terse rigor to a profoundly free but no less terse expressivity.

These are beautiful performances of significant works. The release is a must for high modernists. And a fitting last post for 2016. Onward!
Posted by Grego Applegate Edwards at 6:06 AM