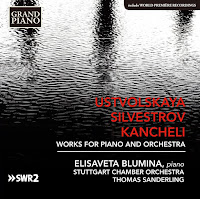 Today's offering is a fascinating mix of Works for Piano and Orchestra (Grand Piano GP 678) by three modern Russian composers, Galina Ustvolskaya (1919-2006), Valentine Silvestrov (b. 1937) and Giya Kancheli (b. 1935). Elisaveta Blumina does the honors with the various piano solo parts; Thomas Sanderling leads the Stuttgart Chamber Orchestra. Altogether they make a convincing case for the four works represented here.

Perhaps the most astonishing of all of them is Ustvolskaya's "Concerto for Piano, String Orchestra and Timpani," written in 1946 in her last year at the Leningrad Conservatory. It is a highly dramatic, highly engaging work not nearly as brash and dissonant as her later piano works were to be, but stunning in its beautiful severity. Regular readers may recall that I reviewed another version of this work, by pianist Patricia Hast and Ensemble Galina/Peter Leopold this past October 17 on these pages. That recording also included a rare chamber orchestra version of Beethoven's "Piano Concerto No. 2." The Hast Ustvolskaya may have a slight edge over the Blumina here, but of course the present disk is an all Russian, all modern affair so I would say both are indispensable.

Moving along then we have Silvestrov's "Four Postludes" (2004) next up on the current program. It is a first recording of some mostly very quiet, enchanting postmodern fare. Though it is not specifically named as a nocturnal, it surely has that sort of uncanny atmosphere.

The Kancheli work, "Sio for String Orchestra, Piano and Percussion" (1998), also a First Recording, gives us a kind of folk hymn as the principal theme. Quietude is interrupted with outbursts of contrasting diatonics and somewhat more strident modern flourishes. The tender and the almost brutal alternate with quite vividly depictive tone color painting. It is imaginative and expressive in an original way, somehow very Russian at that.

Finally we get the short concluding "Hymn 2001" by Silvestrov. This is unabashed lyricism with a pronounced romantic bent, nearly Mahleresque, yet with profound modern touches.

So that is the size of this very worthwhile, contentful release. Both Blumina and Sanderling/Stuttgart Chamber Orchestra put a good deal of care and commitment into the realizations. The results are quite exemplary. Bravo!