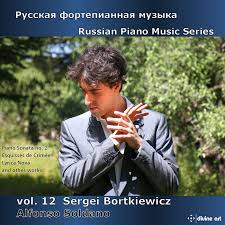 The 20th Century was a high-water mark for classical music, with the recorded medium greatly expanding our ability to hear a great number of works by composers we might otherwise never have had a chance to experience. That situation continues in our present-day world. And we continue to uncover composers and works that have generally been unavailable to us previously.

Today we have an example in the music of Sergei Bortkiewicz (1877-1952), whose piano pieces are nicely represented in Russian Piano Music, Vol. 12 (Divine Art 25142). Alfonso Soldano authoritatively mans the piano chair for a full program of solo works that cover the period of 1908 to 1946.

Bortkiewicz was born in the Ukraine, trained for a musical career in St. Petersburg and Leipzig, settled in Berlin. During WWI he was deported and lived again in Russia. The Revolution and WWII found him again fleeing his various homes until the end of the war allowed him to settle one last time in Vienna, where he lived until his death in 1952.

Perhaps these continued dislocations can explain why his music has been all-but-forgotten today. That and a rather stubborn will to remain within a late romantic style.  Today we care less that someone did not follow the trends and fashions of his or her times, and the music sounds surprisingly fresh, somewhere between Rachmaninov and early Scriabin, yet continuously original in its thematic-melodic creativity. So the end result sounds not so much derivative as an integral voice, another pianistic force within the style-set.

Soldano makes a convincing case for these works, with virtuoso dramatics, sparkle, shimmer and dash.

I find in Bortkeiwicz as presented here a real discovery, not in some history-changing sense but in the quality and originality of the music. Bravo!