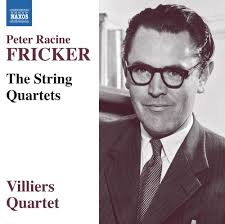 English composer Peter Racine Fricker (1920-1990) made something of a mark on the new music scene in the later forties-early fifties with a number of prize winning and commissioned works. After that he continued on with excellent music but perhaps operated more in the shadows.

In his lifetime he wrote four works for quartet that have been gathered together in The String Quartets (Naxos 8.571374), played with intense concentration and precision by the Villiers Quartet.

The works span a long period between 1943 and 1976. They show a serious and somewhat somber demeanor, filled with a modern chromatic expansiveness (No. 3 is in a serial mode) that borders on severity.

A marked brilliance of craft pervades all four works. Somewhere between later Bartok and, eventually, mid-Elliot Carter in manner of intent rather than imitation, the quartets consistently espouse a serious uncompromising modern expression as the subject matter.

There is growth and change to be heard when following chronologically the thread of expression from the "Adagio and Scherzo" of 1943, the Quartet No. 1 Op. 8 of 1948-1949, the Quartet No. 2 Op.20 of 1952-53 and the Quartet No. 3 of 1976. Three of the four works are in first recordings, surprising given the quality and singularity of this music.

I heartily recommend this volume for anyone with a serious interest in the modern period and in English composers of last century. This is very enlightening and provocative music, performed with zeal and care.