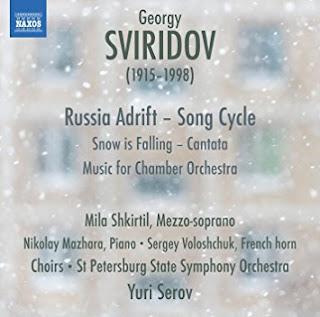 Georgy Sviridov (1915-1998)? The back cover blurb to the release at hand tells me he is one of Russia's most celebrated modern figures for his vocal works. So no doubt he is someone whose music we should hear. For some reason I have not. To make up for the lack, there is the recent recording featuring Russia Adrift, Snow is Falling and Music for Chamber Orchestra (Naxos 8.573685). Featured are mezzo-soprano Mila Shkirtil, pianist Nikolay Mazhara, the Rimsky-Korsakov Music College Female Choir, the Boys of the St Petersburg Radio and Television Children's Choir, and the St. Petersburg State Symphony Orchestra, all under conductor Yuri Serov.

Sviridov had Shostakovich as his compositional mentor. Yet happily the three works on the present compilation show a musical mind with its own sense of melodic tonal-modern momentum. There is a lyric gift there to hear, without doubt. And an essentially Russian dramatic quality to this music can be readily heard throughout.

"Snow is Falling" (1965) begins the program on a charmingly disarming note. Sing-songy folkish playfulness (such as sometimes you can hear in Orff) wins the day with a tenderly expressive part for women's chorus and a dreamy orchestral carpet like a blanket of new fallen snow.

"Music for Chamber Orchestra" (1964) has a decisive interlocking dialog between piano and orchestra. There is a motility that suggests a lineage going back to Shostakovich, Prokofiev and Stravinsky without the derivative musical syntax that might entail.

"Russia Adrift" (1977/2016) enjoys its recorded debut in the mezzo-soprano and orchestra version masterfully realized by Leonid Rezetdinov. It is epic and wondrously deep, with a long and ruminating opening and a heartfelt songfulness mezzo-soprano Mila Shkirtil gives to us with a perfectly artful and moving sonance. She is a wonder. Kathleen Ferrier comes to mind, yet only in association, not that the two sound alike. The orchestral part is equally apt and resonant.

And so that is what is in the offing with this release. I must say I am very pleasantly surprised and in the end very comfortable wearing this music on my ears. It is like Fridays can be. A return to the power of the space and time of something that reaches out and transforms while giving great pleasure.

This is music that with wear becomes like a favorite pair of flannel pajamas. Ever better. Hear it!
Posted by Grego Applegate Edwards at 7:16 AM