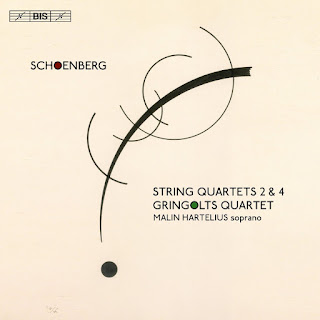 The running joke has been that Wagner's music is better than it sounds. The same could be said of Arnold Schoenberg. He is recognized of course as a major pioneer in modern music, devising the 12-tone system of compositional organization and etc. But his music is not nearly as much performed or as universally loved as many other composers of his century. I would counter that his music sounds much better than what we might expect from a structural wizard. The music never sounds arid or academic, but ever inspired and genuinely human, genuinely masterful and expressive.

Unlike his pupil Webern, Schoenberg intentionally straddled the future and the present-past. His music no matter what else came out of and advanced the music of his time. Webern was no doubt the more radical in his rethinking of thematic means and avoiding direct rootedness. To note this is not to denigrate either. It is only to situate both.

An excellent way to take Schoenberg's music seriously as music is with a recent recording of his String Quartets 2 & 4 (BIS 2267) by the Gringolts Quartet with soprano Malin Harlelius joining in for the 2nd Quartet.

Both of these quartets are masterpieces of their kind.

The Second Quartet was in effect a product of a personal breakthrough, brought on in part by Mahler's abandonment of Vienna for the United States, an affair between Schoenberg's wife and an artist who was living with them, and Schoenberg's own turn to painting. It was 1907-08. The Second Quartet marks a serious turn in Schoenberg's approach, essentially away from Late Romanticism towards an expressionism that incorporates the limits of tonality and a motival intertwining that no longer quite relates to harmonic movement. The fourth movement and its incorporation of a soprano part shot outwards to what at the time were the limits of expression. It no doubt shocked its hearers in those days, but most certainly not us, those of us who have become accustomed to outward movement in modernity.

Then there is "String Quartet No. 4," which takes us ahead to 1936 and Schoenberg's exodus-exile from a toxic Nazi state. Understandably it was another trying time for the composer. This is fully mature Schoenberg, an extraordinarily complex and brilliant construction of color and motif, beautifully idiomatic string writing, and dynamic upheaval that transports one to a very rarified modern musical world.

This happens to be an excellent performance of the two quartets. The Gringolts Quartet know very much what they are about and pay close attention not just to the notes themselves, but the syntactical sense behind them. Whether you already love Schoenberg's music or need to expose yourself to the best of it to learn to love it, this release is an essential!