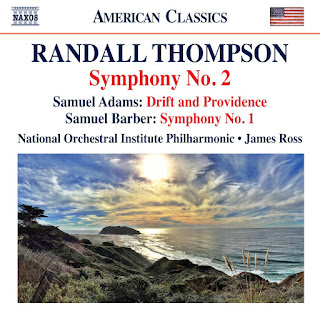 Classical-modern American Symphonies both older and new are the fare on the release by James Ross and the National Orchestral Institute Philharmonic. In the slot of primary billing is Randall Thompson Symphony No. 2 (1931) (Naxos 8.559822). Included in the volume are also Samuel Barber's "Symphony No. 1, Op. 9" (1936) and Samuel Adams' "Drift and Providence" (2012) .

It is a bit of Americana without going out of its way to be so, quasi-Nationalism without any overt gestures thematically. Thompson's Second has syncopation that is not quite jazz (of 1931) but has something of the lively rhythmic bustle of the age and place.

Samuel Adams and his "Drift and Providence" updates the quilted earthiness of American symphonic form for today yet does not insist on overt modernity.

We get a generous sampling of the symphonic form beyond the overtly romantic. All is well played by the National Orchestral Institute under Ross.

It is not music that will change your life, exactly. Nonetheless there is much pleasure to be gained in the hearing. Recommended.