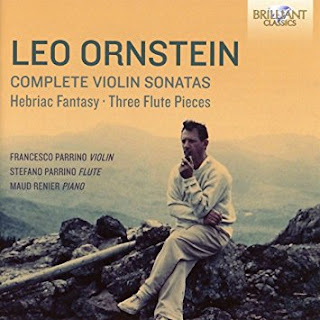 The figure of composer Leo Ornstein (1893-2002) remains obscurely but constantly visible on the Euro-American scene if one looks carefully for his music. A Russian Jew born in present-day Ukraine, he came to the United States (New York) in 1906, where by around 1920 he was the enfant terrible of modernism, as a composer and pianist. Then he abruptly abandoned his concert career and went on to teach. His music faded from the limelight and he lived out his long life in relative obscurity.

His music nevertheless still speaks to us. Some of it is tonal and late romantic, some of it daring and boldly dissonant. In the recent Complete Violin Sonatas (Brilliant Classics 95079) we get both Ornstein styles, the modern iconoclast and the romantic lyricist. The soaring violin component is a constant, the piano element determining largely which of the two creative poles are dominant in any moment, and sometimes, as in the "Hebraic Fantasy," there is an uncanny commingling of both elements and Jewish tonality with a decidedly expressive flourish.

We hear his two published Sonatas, the Hebraic Fantasy and an Op. Posth. Third. It gives us a long listen to how he looked at the violin-piano totality. And then as a bonus we also get "Three Pieces for Flute and Piano," which takes flight in a middle ground halfway between the avant and the romantic.

And in all of it the modernist and the expressionist are at the forefront, neither the one nor the other having absolute reign. And there is the Jewish-folk element present, too.  The performances are uniformly excellent. It is a valuable addition to the Ornstein discography. It may not be a demonstration disc for his radical modernist side, but then again it gives us a balanced look at his overall thrust and appeals uniformly as good music. Recommended.


Posted by Grego Applegate Edwards at 6:30 AM