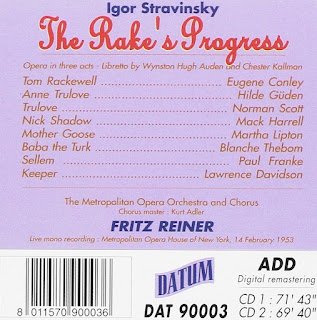 To be honest, Stravinsky's final opera The Rake's Progress has been a work where I tend to run hot and cold. Ever since I found an original LP set pressing of the mono version with Stravinsky himself conducting (which was around 1982 in Chicago), I've found parts of it to be extraordinarily moving, other parts to be wearing a bit thin after countless listens. Admittedly it is one of the opera masterpieces of the first half of the 20th century, but perhaps a flawed one. There are sections needed to move along the plot and then there are sublime moments, many of them, that epitomize and conclude the master's neo-classical phase. In the end the sublime majority of the music wins the day.

I've encountered the opportunity to review another version, a recording like the old mono LPs from 1953, again with the Metropolitan Opera cast, this time with conductor Fritz Reiner (Datum DAT90003 2-CD). It is a live recording but a well handled performance with no egregious gaffs. It would appear from the date it was recorded that (thanks to Wikipedia) this must have been the World Premiere perfomance of the fully staged opera?

The opera has a sell your soul to the devil theme like "A Soldier's Tale." But as Hogarth's celebrated engravings on the Rake and his downfall are the basis of the plot, it is general worldly success and good luck with women that are the Devil's end of the bargain. In the end though Nick the Shadow wreaks havoc.

This version has much going for it. The live versus the "studio" version and Stravinsky's direct conducting of the latter version means that orchestral parts perhaps have slightly more "bite" and polish on the old Columbia disks. But the overall trajectory of the whole is well served in either version. The cast is virtually the same. Eugene Conley as Tom Rakewell and Mack Harrell as Nick the Shadow especially distinguish themselves on both recordings.

I see on the web that the original Columbia LPs have been available on Naxos as a CD set, and perhaps still are. If so that version may have the slight edge. Nevertheless the Reiner version is very good. The live version may have the edge for the vocals in terms of performativity. The Naxos excels on the orchestral end. For Stravinsky die-hards both versions and some later ones as well may appeal to you. I am glad to have the two.