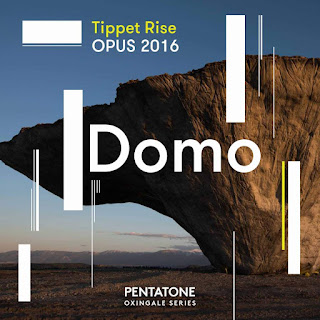 There are musical gatherings that are more than a collection of musicians addressing a body of works. There are those most welcome but also most rare of confluences, the time when magic prevails. Such was very much the case with Tippet Rise OPUS 2016 and their Domo (Pentatone Oxingale Series 5186 660).

The recording documents a concert held last year at the Tippet Rise Art Center in Montana, set on a stunningly beautiful natural and sculptural site that most apparently lends itself to inspired music making. Domo gives us a remarkable chamber music program of mostly early modern Russian chamber landmarks and a few notable other works, all performed with uniformly high caliber artistry.

Everything begins with a roaringly dramatic performance of Scriabin's "Piano Sonata No. 5," a very singularly passionate reading by Yevgeny Subdin that to me stands out as one of the most moving I've heard. It is followed by two songs and a piano work by Anton Garcia Abril, performed with care by pianist Christopher O'Riley and soprano Emily Helenbrook.

O'Riley then joins with cello master Matt Haimovitz for a ravishing version of Rachmaninoff's "Vocalise." Then we are treated to an infectiously joyful version of Stravinsky's third movement for the solo piano version of "Trois mouvements de Petrushka" played with nearly ecstatic verve by Jenny Chen.

From there we get quite stimulating versions of the second movement from his "Suite No. 1" (O'Riley and Anne-Marie McDermott, pianos) and Chopin's "Nocturne Op.15, No. 2" (Stephen Hough).

The fitting and most notable climax and finale comes with a trumpet and two piano version of Scriabin's "Poem de l'extase," with O'Riley and Svetlana Smolina on pianos and Elmer Churampi on trumpet. I've never heard the chamber version and I must say in the very capable hands of these three artists the music has all the mystery and thrust of the orchestral version but at the same time an intimacy that is different and refreshing.

So I am not one to gush about what could on the surface seem to be an ordinary concert of mostly well-trodden repertoire pieces. It isn't. The performances are marvelous, uniformly so. Anyone who cherishes the Russian early modernists will surely find this a very memorable recording.

Wow.
Posted by Grego Applegate Edwards at 6:54 AM