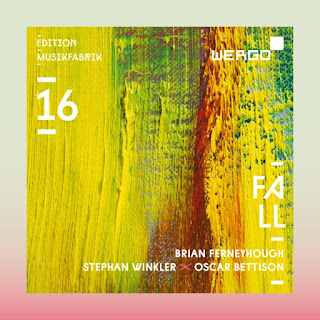 The sun shining outside my window this morning reminds me it is another day. I do not suppose the jog to memory is necessary since I've managed to fix a cup of black coffee. I already know. But then today's New Music selection reminds me that time marches on regardless of sun or coffee, or for that matter the lack. The music seems to bring time forward. It is Volume 16 in the Edition Musikfrabrik Series, otherwise known as Fall (Wergo 6869 2).

The series involves New Music played very capably by the Ensemble Musikfabrik, a chamber conflagration-orchestra who takes such things very seriously and performs works with a combination of zeal and full, successfully artistic attention to the wishes of the composer(s).The 16th Volume follows in the path with new World Premiere recordings and another previously released in another recording that nonetheless gets pristine treatment here.

The Brian Ferneyhough work "La Chute d'Icare" is the non-premier of the three and the shortest in duration at under ten minutes. It is a tumblingly dynamic work that features a devilishly tricky clarinet explosiveness seconded and brought to a irrepressible aural boiling point by the ensemble's ever goading yet "happy" assault. It is happy in that it does not seem in the least menacing to my ears, so you know what I am trying to convey in these words.

Stephan Winkler's following "Von Der Gewissensnot der Insekten" continues the tumult with some beautifully semi-sternklang-type tumbling totalities made up of ingeniously interlocking instrumental parts. It is a pinwheeling, rocketing aural expressiveness of the Highest Modernity whatever that means except you will know when you hear it!

The longest work of the three clocks in at more than 30 minutes and gives us pause for its uniquely intense grappling with sound and space. It is Oscar Bettison's "Livre des Sauvages," a sort of minutiae of "Simon Says-like" sound gestures initiated by the conductor--of course I should say via the score. It is exciting fare, volatile and bursting with kinetic energy.

It is all good and nicely turned. Anyone who still believes that the avant garde means business will find confirmation and even some joy in this wonderful music and its sterling performance. This puts the capital /N/ back in New! So grab it, then, if that sounds like something you would like.
Posted by Grego Applegate Edwards at 8:22 AM