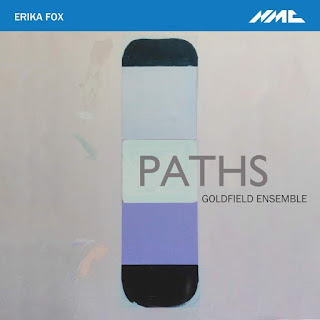 Composer Erika Fox (b. 1936) has all the newness, has the sort of "sound of surprise" that we expect and hope for in New Music Modernism. She was an important part of the London and European New Music scene in the '70s through the '90s and has amassed a catalog of some 52 works. That here in the later '10s of the Millennium she has been neglected and virtually forgotten in many ways is partially rectified by a new and rather exciting release of her music entitled Paths (NMC D254), as heroically and movingly performed by the Goldfield Ensemble.

The five substantial and even brilliant compositions performed for us on the CD take a bit of concentration to assimilate fully and that is only natural with such nicely detailed music. There is a sort of lyrical High Modernism consistently at work on each of the pieces, but other things as well. In the liners Katre Romano, Artistic Director of Goldfield Productions, calls the music "bold, feisty, uncompromising and uncommonly fresh." She notes the influences of the composer's upbringing that we can hear in the works at hand--Eastern European classical music plus "Hasidic Music, liturgical chant" and "modal ancient melodic lines reminiscent of Eastern European folk music."

We listen to the program in sequence and Erika Fox's own special world opens up to us with impact and expressive mystery. Richard Baker conducts the larger version of the Goldfield Ensemble and soloists on the dramatic end-pieces "Paths Where the Mourners Tread" and "Cafe Warsaw 1944."

In between are smaller chamber gems, "Quasi una Cadenza," "On Visiting Stravinsky's Grave at San Michele," and "Malinconia Militaire."

Everything has mass and weight; there are no superficial or facile byways. As Romano poignantly states in the liners, there is not so much a matter of development in the New Music language she so adroitly takes on as her own. It is more a matter of endless invention, or variations that have an organic connection with what came before but most assuredly do not directly comment on any of it. It means that the listener is given a continual tabula rasa yet everything is profoundly joined as in eloquent speech.

It is a most enjoyable and enlightening program. Erika Fox is a real treasure and I recommend you hear this by all means!