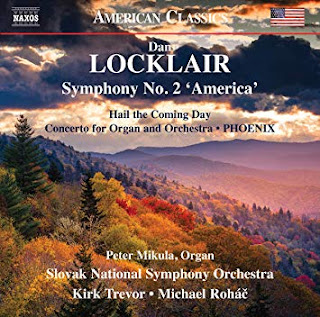 Dan Locklair (b. 1949) has a pleasing way about him. There is something of a present-day Copland feel to him in his fondness for paraphrasing Americana sorts of themes at least most certainly in his Symphony No. 2 "America" (Naxos 8.559860). The program at hand is well performed and contains the symphony, two shorter works plus the "Concerto for Organ and Orchestra."

It is homespun mainstream--the sort anyone might like and there is little exactly that would define it as Modern except that it is not "Classical" or "Romantic"." It is tonal-pleasing, reminding you perhaps of the things you might hear on a good contemporary movie soundtrack or as done by a wind band of a superior sort Vittorio Giannini comes to mind but not in any way I can pinpoint here. Nobody would take offense at this music and it is is enjoyable, very much so.

The "Symphony No. 2 'America'" is in the form of a Holidays Symphony--with a movement each for Independence Day, one for Memorial Day and one for Thanksgiving. "America the Beautiful" is paraphrased a good deal at first. We hear "Taps" and then not surprisingly the hymn "We Gather Together (To Ask the Lord's Blessing)" for the Thanksgiving movement.
The other works are less obvious I suppose but pleasing. He is inventive in ways the most rudimentally musical layman could no doubt understand. So good for that as far as extending the music in concerned!


I enjoy this program without necessarily putting some seal of "masterpiece" on it all. It pleases me.And the first time through you get the whole thing, pretty much. It is not like you are going to open up  a great deal of vistas on listen number 10. It is what it is and that "is" happens to be fine and dandy, well done. Lovers of Americana will be right there I imagine. I might rather hear Charles Ives personally, but I do not want to turn this into a horse race. Nicely done. Nice music. And that includes the "Concerto for Organ!"
Posted by Grego Applegate Edwards at 7:38 AM