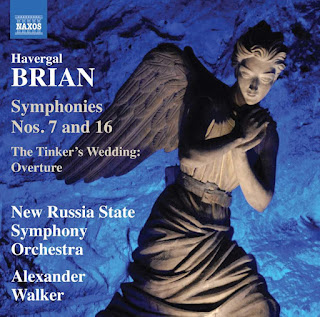 The oscillating paradox of English composer Havergal Brian (1876-1972) gives the music listener-historian one of the more unusual examples of 20th century compositional life and style possibilities. Most importantly he has a great deal to offer the modern listener. He lived a long and prolific lifespan as a composer, producing an astounding 25 symphonies, the first batch gargantuan and rather sprawling, the later somewhat more compact but all in an English Late Romantic realm that sounded nothing like Wagner or Richard Strauss yet shared in their penchant for the big sound, the big canvas of orchestral colors.

That he continued to produced original and inventive symphonic work through most of the 20th century and preserved and developed a working anachronistic style that continued to evolve in his individualistic hands is something uniquely fascinating and impressive in its very own way. And we hear his music as both of and alien to the general time in which we live. We experience a kind of oscillation of time and place as we listen.

The Brian symphonic program at hand gives us a varied and intriguing sample of his output, played convincingly and bracingly by the New Russia State Symphony Orchestra under Alexander Walker.

There is (quite naturally) as one listens to these offerings (Naxos 8.573959) no doubt that we are dealing with more of an English than a German or French sensibility.  The rustic English countryside and the warm and congenially apportioned pub seem more present than some Teutonic or Gallic place-music version of things. At the same time it is music that points to itself so we should not focus exclusively on the local tendencies that are happily there. It is pure music in the end after all.

The "Symphony No. 7 in C Major" (1948) as the liners tell us, is the last of the long and ample early symphonies, with a large orchestra, filling up nearly 40 minutes with its four movements. It is based on Goethe's autobiographical writing on his student days. Yet on first listen it is not entirely necessary to come to grips with the programmatic content here because it is expressive Brian first and foremost, secondarily programmatic.

"The Tinker's Wedding Overture" (1948) gives us in some ways the opposite sort of work--a short and light-hearted piece based on the J.M. Synge comedic play of the same name.

Then we are in some ways set squarely in-between these two polar opposites with his "Symphony No. 16" (1960), thematically centered upon Ancient Greece and the Persian Wars.

This hour program reminds those already familiar how there is unfailing art and craftsmanship in virtually everything Brian wrote and that, surely with these three at any rate, and most likely with the entire corpus of later works but I cannot yet vouch for them all, there is no sign of flagging in his mid-later period. If you do not mind that Brian bypasses prevailing styles of the  period concerned, if you do not expect any traces of the New Music or even progressive music scene that existed in the world in which Brian lived, you will be I think happily situated as you hear and rehear this music. It is not of its time. Yet it is timeful, it is current within itself surely.

The volume also serves as an admirable introduction to Brian for those not familiar.