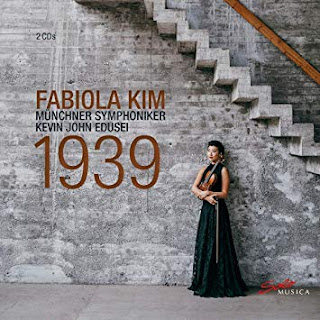 The year 1939 in Europe was as decisive as it was grim. Look it up. The Nazi forces were invading Europe. Yet composers tried nonetheless to keep on with their art. Violinist Fabiola Kim had the brilliant idea of choosing three Violin Concertos written in that fateful year and doing definitive recordings of them as a kind of compositional diary of an era.

If we expect to find bold agitation we honestly are more likely to find it in the classic Russian WWII symphonies--Prokofiev's Fifth and Shostakovich's Seventh. Yet the full gamut of emotions are nevertheless present in the three works at hand and they are hardly "lighthearted" or "happy" as you would have every reason to expect. These are not about a series of carnivals, surely.

The result, entitled  1939 (Solo Musica 308 2-CDs), brings to us carefully, expressively heartfelt readings of the three concertos we should well remember as being masterpieces both of and transcendent of their time. They are subtle, deep, filled with musical-psychological complexities. And we get impassioned readings from Fabiola Kim and the Munchner Symphoniker under Kevin John Edusei. And so we hear state-of-the-art readings of William Walton's "Concerto for Violin and Orchestra in B minor," Karl Amadeus Hartmann's "Concerto Funebre for Violin and String Orchestra" and Bela Bartok's "Violin Concerto No. 2 Sz. 112 in B major."

Many if not most will know the Bartok but to have an excellent performance of that alongside the Walton and Hartmann is to feel the weight of the time at hand then, to hear three master composers try and express the horror and upheaval and too the premonitions of what more was to come.

There is no real sentiment of a Romantic sort in these works and that is understandable. It is Modernism in its root foundation and one might argue that the World Wars period did as much or more to kill Romanticism as anything.

A coupling of this sort makes us take stock of the period in ways nothing else really could. The excellence of the performances make us take notice but then too the choice of these sometimes less-attended-to works (certainly the Walton and Hartmann anyway but the Bartok needs to be heard with these two to place it all in focus) enlightens us and reminds us what kind of courage people needed then, whether composers or anyone else.

Bravo. Just listen,
Posted by Grego Applegate Edwards at 9:14 AM