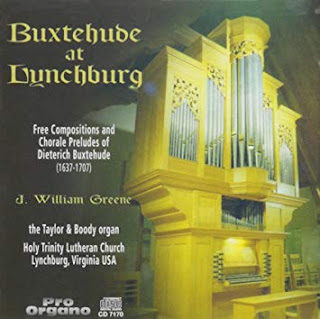 My gradually unfolding, happy interaction with classical organ music has been rather informal, with a follow-the-nose intuitiveness that started with an early and happy experience hearing a well attuned and well played cathedral organ in my childhood as a regular member of the St. Anthony Parish in Butler, NJ. And it in the most general terms was an organ world when I was a kid--for example down at the seashore there were mighty organs playing in the beachfront hotels and I listened eagerly. Bach works were my first serious interest as far as organ recordings went. And from there I followed threads that made sense backwards to Buxtehude and farther afield and then also forward to the French School from Franck to Messiaen (see last Monday's post here for a little more on that).

I had piano lessons as a kid and later as well, and we had a piano at home that I played upon as a student of the instrument and someone musically inclined alike. I would also goof around on the Farfisas and Hammond B-3s that were in some of the rock and jazz-rock bands I was in from 7th grade on, but I never had the pleasure to have organ instruction or take a course on organ literature and histor,y etc. It just did not come up in my education--and not through a lack on interest.

So when I read in the liners to J. William Greene's Buxtehude at Lynchburg (Pro Organo CD 7170) that Greene in the title is paying homage to an old 1967 E. Power Biggs Columbia LP Buxtehude at Luneburg, I simultaneously regret missing out on this icon of recorded vinyl and appreciate being tipped into the organ lore of which I no doubt have many serious ellipses and gaps--and if I am ever to be thumbing through a stack of used LPs in a thrift store again I will look out for the album, surely.

All that may seem a lot to preface this review article with, but anyone who reads these columns regularly knows that of course part of my engagement with the music is as a person and so I feel it sometimes somewhat illuminating that I recount my involvement in the history of the appreciation of music I have lived through for as near a lifetime as anyone--though I hope with much more to go!

Back to the subject at hand however. The subtitle of this fine CD is Free Compositions and Chorale Preludes of Dieterich Buxtehude. That says it all if you already know it all, but for those of us who do not, the liners give helpful fleshings out. So the Choral Preludes were meant to introduce artfully the specific German chorale that the congregation was then to sing in the service at that point. As the notes suggest, the preludes are remarkably ornate at times, contrapuntally elegant and brilliant, Buxtehude at his finest.

There is poignant content and exceptional linear variety in the Praeludium, Toccatas, Passacaglias, Fugues, and Canzonas we hear in the course of the program. J. William Greene is meticulous to a fault yet as spirited as we might hope for. The recording is crisp and clear in aural staging, and the Taylor and Boody organ of the Holy Trinity Lutheran Church in Lynchburg (of the title), Virginia is ruggedly traditional-sounding and just right to bring out nicely the voicings Buxtehude specifies.

All-in-all this is the Buxtehude we revel in if we give the music a chance. It is exemplary in its unpretentious down-to-the-bone performance wonders and it sounds great. So I recommend it very highly. I will treasure this one. I hope you will too.


Posted by Grego Applegate Edwards at 3:00 AM