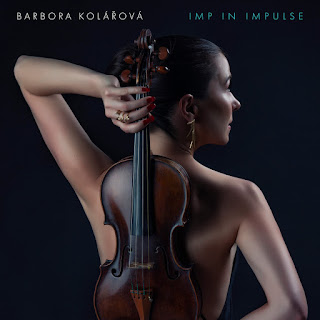 The world of unaccompanied violin, viola or cello works might be seen as subject to some prime influences. Nowadays there is of course the enduring example of Bach and also that influence as channeled in more Modern ways by Reger and Hindemith. Then perhaps there is the more flashy virtuoso path of Paganini and perhaps also the conflation of tunefulness and virtuosity in Kreisler. There are no doubt other compositional influences as well but these particular ones come to me this morning as I write this..

These thoughts occur to me, that is, as I specifically listen to an album forthcoming very soon from Czech violinist Barbora Kolarova. It is an all-solo outing entitled Imp in Impulse (Furious Artisans FACD 6822).  She makes a strong showing of considerable virtuosity harnessed to a nicely overarching expressivity via three compositions that give us substantial fare to contemplate. The works show the general influences of all the above-mentioned composers to greater or lesser degrees while maintaining an original stance, all while Ms. Kolarova puts her own very personal stamp on the performances.

Of the three composers represented here, Jean Francaix (1912-1997) is the most familiar (to me). His "Theme with 8 Variations for Solo Violin" (1980) is the midpoint in the program and has in its eight variational movements the kinetic virtuosity of Paganini and Ravel with a pronounced inventive abstraction that sets it into later last century decidedly. Kolarova handles it all heroically, as she does the entire program.

Pascal Le Boeuf's title piece "Imp in Impulse" heads off the program with a premier recording of the five movements that have memorably thematic and figurational impact, a kind of spontaneity the name of the work implies and some decided freshness that repeated hearings only serve to underscore. It was composed especially for Ms. Kolarova by the American Le Boeuf and seems to dovetail remarkably well with the violinist's adventurous musical personality.

The title refers to philosopher Paul A. Lees' phrase (Imp in Impulse) that personifies the human tendency to monitor and act on a need to avoid mistakes--which brings a two-edged sword to our actions, because we can resolve errors but we can also cause them by being too quick to act. The music reacts to and plays upon that paradox in winning ways if one listens for it.

The final "Partita for Solo Violin" gives us some extraordinarily complex, expressive and difficult-to-play ecstatics of sound from Moravian Klement Slavicky (1910-1999). It manages to pay homage to Bach's solo violin Partitas as it travels originally and independently forward to present-day Modern territory.

Barbora Kolarova should receive well deserved acclaim for this fine album. It has all the drama and excitement one might hope for in a solo violin recital. The music surely warrants our full attention. Bravo!