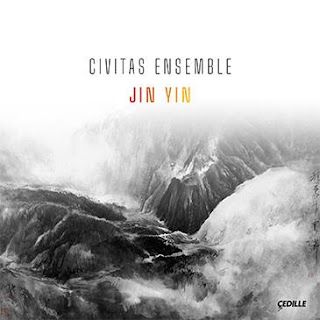 Formed around a nucleus of Chicago-based instrumentalists, the Civitas Ensemble shows us what they are made of on Jin Yin (Cedille Records CDR 90000 193), a fascinating anthology of New Music by Contemporary Chinese composers.Three works are in their premiere performances, two are premieres for the arrangements made especially for the Civitas Ensemble. All are very worthwhile.

Ever since 2011 and the inception of the Civitas Ensemble, there has been an important nexus with the Chicago Symphony Orchestra via founding members Yuan-Qing Yu (Assistant Concertmaster of CSO), Kenneth Olsen (Assistant Principal Cello) J. Lawrie Bloom (CSO Bass Clarinet)--but also a general Chi-town nexus with additional locals, notably co-founding member Winston Choi who is head of the piano program at Roosevelt University's Chicago College of Performing Arts. As the current recording attests the ensemble has a pronounced dedication to the international dimensions of New Music.

All five compositions have in common the bridging of two cultural musical traditions--that of the legacy of Chinese Classical and that of "Western" New Music as developed and practiced over the years, and of course coming into present-day developments . Each work invents that bridge for itself. No two creative solutions are alike and what stands out is how each has real originality, a pronounced lack of formulaic solutions, and how well the Civitas Ensemble takes on the implications of each work and does a supremely imaginative and fully musical job bringing the music to life.

Jin Ying, Chinese for "Golden Tone," was spearheaded by Civitas principal Yuang-Qing Yu. It is Civitas' second album to date. "Golden Tone" points to the search for musical clarity of expression and pronounced substance that the album surely succeeds in realizing.

The opener "Five Elements" brings to us Zhou Long's lively music in a new arrangement that features well emergent solo parts for Yihan Cheng on the pipa, Cynthia Yeh on percussion and Emma Gerstein on flute and piccolo. The elements of metal, wood, water, fire and earth were considered in ancient Chinese philosophy to comprise the building blocks of life itself. Each element gets an evocative movement. Especially notable is the deliberate, long-formed first movement "Metal" and the exciting energy of "Fire" during movement four.

Next up is Chen Yi's "Night Thoughts," now rescored and rearranged especially for the Civitas Ensemble. It was inspired by a Tang Dynasty poem and reflects the contemplative mood of the poem--lonely and nostalgic, open, serene.

The premiere recording of Lu Pei's "Scenes Through Window" has an irresistible rhythmic drive and complex cyclings-through that build logically and satisfyingly. The second half of the work gives a more calm and lyrical spin to the proceedings. Well done!

Vivian Fung's "Bird Song" begins ornately with violin and piano waxing eloquently with the equivalent of a series of warbles. Things gradually get more robust, more mercurial and on it goes nicely, stirringly.

The album ends with the seven-movement "Emanations of Tara" by Yao Chen, featuring once again the virtuoso Yihan Chen on the pipa. The scoring is masterful and rather neo-Impressionistic in a classic Chinese way with its glowing luminescence, its mysterious depths and breadths.

There is much to appreciate in the melding of the exemplary lucidity of the Civitas Ensemble and the dynamic Chinese-Modern brilliance of the five composers involved. This is one of the finest such offerings I have heard, the very best in a long time. Strongly recommended.


Posted by Grego Applegate Edwards at 8:01 AM