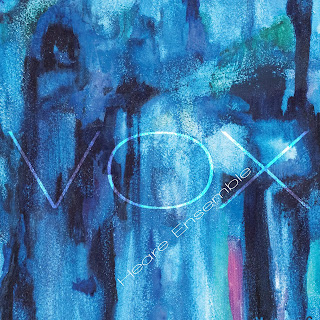 Vox (Innova 040) allows our ears to bask in Modern Chamber Music of a less abstract sort, with a nod to evocative meaning. The Heare Ensemble give us warm and vivacious readings of mostly multi-movement works that hang together well as a kind of expressive whole.

The Heare Ensemble distinguish themselves throughout as an eloquent trio comprising Jennie Oh Brown on flutes, Jennifer Blyth on piano and Kurt Fowler on cello.

The album celebrates George Crumb's 90th birthday with a mindful yet ebullient performance of his classic 1971 tribute to Humpback whale song, "Vox Balaenae." The three players are to be masked in performance, their instruments electrified. The Heare Ensemble first performed the work together during their student days at Eastman. Since then they have played it in concert more than 25 times. It is both a sign of their affinity for the music and a bellwether of their intimate mastery of the Crumb style. Along with his "Makrokosmos" series for piano and several other chamber works "Vox Balaenae" is sublime Crumb and a fitting way to celebrate his 90th. Happy birthday, George!

Thai composer Narong Prangcharoen has a well-considered de facto kind of response to the work with his "Bencharong" trio in five movements. It follows the creation sequence of the Thai pottery of that name--which is a rather precarious production with three to eight successive glaze firings, each with a different color. Only after the sequence of stages are properly overcome is the vessel completed. One false move in any of the stages and the pot is discarded. The music has that "making it all count" immediacy to it.

Crumb's love of Appalachian folk song and his generally melodic vibrancy are celebrated in the final two works, Stacy Garrop's "Silver Dagger," which is an effectively lovely reworking of such a folk song, and the Carter Pann "Melodies for Robert," which sports out-front, engaging melodics commissioned by the family of Robert Vincent Jones in memoriam.

And so ends a program literally brimming over with meaningful music. The Crumb work revels in benchmark poignancy; the three accompanying works stand out as worthwhile and worthy counterparts in this high-watermark program. The Heare Ensemble triumphs. The music wins the day from beginning to end. Hear this, by all means. It reminds us how central Crumb remains in our time, and happily how his legacy is very alive.