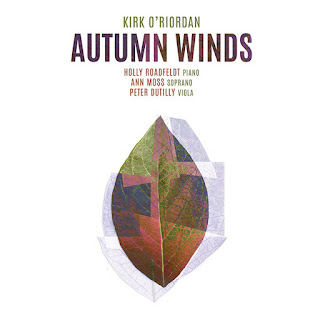 There are compositional avenues that have begun opening up since somewhere in the later '70s-early '80s of last century. It is a post-Minimalist tonal lyricism that owes something to the examples of Arvo Part, the John Cage of "Cheap Imitation" (his Satie tribute), George Crumb, perhaps the example of later Morton Feldman, and other things besides, not to omit influential Minimalists like Riley and Reich.

It is music that generally eschews complex harmonic modulation for sometimes an almost chant-like ritual steady-state. Repetition may be present but it is not the primary vehicle of musical syntax so much as there is a linear logic of that sometimes as combined with an overarching variational sequencing.The more ritualistic of this style has been dubbed Radical Tonality and the Cold Blue label has been an outstanding exponent of that byway, but there are less cosmically oriented works out there too that nonetheless show off a direct tonal lyricism as well. Today we have a composer in the latter "camp," and four exemplary chamber configuration examples.

I speak of Kirk O'Riordan and his Autumn Winds (Ravello RR8029). Featured are a series of somewhat interlocking, mutually illuminating, recently composed (2012-2016) works, two for soprano Ann Moss and pianist Holly Roadfeldt--the song cycle "Four Beautiful Songs" (with Peter Dutilly on viola) and the vocal-instrumental sequence "Autumn Winds," then the purely instrumental contrasts in "Prayer Stones" (for Roadfelt and Peter Dutilly on viola), and "Beautiful Nightmares" for piano (Roadfelt) alone.

"Nightmares" is the more harmonically complex, at times more dense and therefore the more overtly "Modern" sounding of the lot. But like the others there are tonal sequences that set the music apart as not of the "variations on variations" sort of approach. There are sectionalities and a deliberate quality one comes to recognize and appreciate on repeated listens.

The viola-piano "Prayer Stones" is quite contemplative, lyrical, "quietly spiritual" as Holly Roadfelt notes on the liners. The music breaks into a number of meditative gestures and has a beauty that in effect haunts the listening self when heard with deep concentration.

"Autumn Wind" sets 15 haiku by the revered poet Matsuo Basho. There is a musical equivalency to the spare suchness of the words that enchants nicely.

Finally the soprano-viola-piano "Four Beautiful Songs" sets the poetic texts of O'Riordan's close friend Lee Upton. It is all about beauty as experienced from multiple personal angles, including as Roadfelt notes "the wonder, the conflict, the joy and the turbulence" of it all. The music has tensile strength and contrasting episodic originality.

That in effect is this album in a nutshell. It is a program notable for its fine, idiomatic performances by all concerned. Compositionally it seems on first blush simple at heart but as one listens the details both flesh themselves out and freshen the listening mind so that it all seems increasingly evergreen  and more complex than at first might be thought. Recommended for those New Music enthusiasts and acolytes who find a lyrical turn welcome. O'Riordan brings us much to contemplate and appreciate.

Posted by Grego Applegate Edwards at 9:48 AM