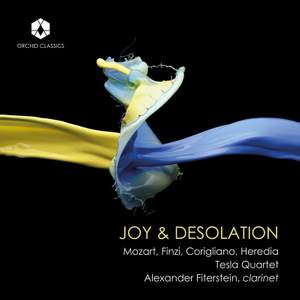 Something now hundreds of years back and the date was 1789, more exactly 231 years ago now,  Mozart so admired the clarinet playing of Anton Stadler that he sat down and wrote him the iconic "Clarinet Quintet" in A major, K581. Its expressive power was of course enormous. So much so that one might well date and attribute at least in part the continuing power of this particular chamber configuration (clarinet plus string quartet) from that work's influence and continued currency.

Perhaps nowhere can you feel that more intently than with a present-day clarinet quintet of special strength--the Tesla String Quartet plus clarinetist Alexander Fiterstein. They create a winning program that starts with the Mozart work and then jumps to some 20th and 21st century quintets of palpable interest, all on the recent Joy & Desolation (Orchid Classics ORC100106).

Throughout the many varied developments in the four works presented on the album it becomes plain as one listens that the Tesla Quartet and Fiterstein are in their element, that they manage through a pronounced mutual chemistry and affinity for the music at hand to create a considerable magic.

From the point of view of the dedicated listener the magic of the very familiar in a special reading is one thing while the magic as introduced in an unfamiliar work another. And so it is for me after a near lifetime of listening to the Mozart in recordings of various versions, hearing it played so proudly and boldly here gives additional truth to the work's greatness.

That same matter-of-fact expressive presence carries over to the rest of the program too, though of course for me hearing these other works is a new opening on the chamber possibilities of our current era, and so an experience of a slightly different order.

So the clarinet brilliance and the string deepness continue most naturally with stylistic extensions into the Modern of just yesterday and also today.

And as we travel through the program in this way we come very pleasurably upon English 20th century original Gerard Finzi (1901-1956) and his eloquently homespun, feelingful "Five Bagatelles" in its Christian Alexander arrangement for clarinet and quartet (the original scoring was for clarinet and piano). The liners note how both Mozart and Finzi draw out of the clarinet a special full, multi-register sound presence that Fitenstein brings out nicely. And of course that works well thanks to the heroically upstanding blend the strings achieve with the singular clarinet voice throughout.

John Corigliano's "Soliloquy" turns the mood to something somber, overtly expressive and Modernistic in touching ways while Carolina Heredia (b. 1981) continues and extends the overall feel compellingly for the program finale,  her "Ius in Bello.".

The performances take us on unbroken voyages of vivid color and succinctly moving aural poetry. The end result is a near-ideal mix of insightful timbral compositional shadings and some ravishing realizations. Strongly recommended.


Posted by Grego Applegate Edwards at 9:07 AM