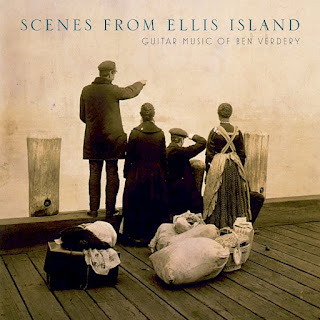 Composer-guitarist Ben Verdery writes guitar music that is rather remarkably idiomatic, music that lays out on the strings well. If you did not already know he was a guitarist (since he plays on the album at hand) you could tell from the music. I mean on his album Scenes from Ellis Island (Panoramic Recordings PAN14), which features six of his guitar-centered works, with the composer on mostly nylon stringed classical guitar (but also baritone and steel string for one work).

It is work that evokes both musical and extra-musical associations and does so with a sense of eclectic encompass. Listeners would not mistake this music for something historical, older. It is thoroughly of our time without necessarily being rabidly "Modern." For that it is thoroughly Contemporary. There are "Progressive" elements, a nod to Popular Culture (in vocalist's beat box rhythms on "From Aristotle") a kind of ethnic vocal panorama (in "Scenes from Ellis Island") and some very nicely hewn guitar lines, some fascinating inventions for one or two guitars, vocals, and in one case, cello (the latter on the title work).

Ben Verdery in the liners talks of the varying inspirations for the works on the album. The opening "What He Said" (with Simon Powis on second guitar) utilizes call-and-response and musically portrays Verdery's inspired love of Gospel Music.

"Now and Ever" centers on the minor second interval, accentuated by a special tuning. The interval for the composer represents the struggle and sorrow of those suffering repression.

"the rain falls equally on all things" was initially inspired by Schubert's "Nachtstuck."

"Scenes from Ellis Island" followed from the composer's visit to the historic site and his feelings on encountering evidence of the bold and brave process of immigration, of those "yearning to breathe free" as the iconic poem about Lady Liberty has it.

In the main this music gives us some extraordinary well constructed, inspired and for that matter well played guitar works. Anyone who looks for such things in the New Music realm should find this one especially nice, I would hope. Recommended.


Posted by Grego Applegate Edwards at 7:23 AM