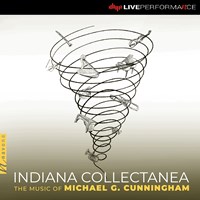 In the person of US composer Michael G. Cunningham (b. 1937) we have a very prolific voice for the Contemporary, a man with a long and distinguished teaching career, a very large compositional catalog of works that deserve our attention, and eight albums of his music released on Navona Records, some of which I've gladly covered on these pages (type "Cunningham" in the search box above for those).

We now have his 9th release for the label, a compilation of live performances of Cunningham chamber works entitled Indiana Collectanea (Navona NV6270). On it we hear some 11 works of interest, recorded in concert at Indiana University between 1969 and 1973.

Performances give us a fine snapshot, a musically skilled and clear idea of the work at hand. The recording quality is generally good. The compositions show us a Cunningham fully formed, an original voice within the Dodecaphonic/post-Dodecaphonic, generally post-Tonal realms of Modernism as it stood when Cunningham was getting his doctorate (1973) at Indiana University.

Like most all well conceived High Modernist works, the rhythmic and note-upon-note harmo-melodics come alive especially with multiple listens. Cunningham makes every note count in a program that stands out once one listens in this way. It's another fine outing from a composer who deserves wide recognition. Anyone in the Modernist camp or wishing to explore further classic later 20th century approaches should find this album an absorbing and rewarding thing. Definitely recommended.
Posted by Grego Applegate Edwards at 7:37 AM