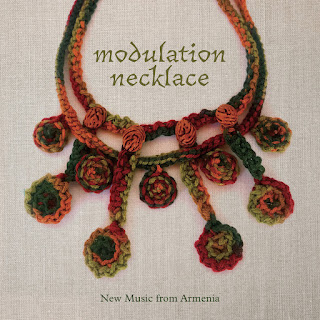 Those who know what typical Armenian Folk and Classical Music sounds like, a distinctive minor-modal signature that marks it all its own--will no doubt almost involuntarily listen for it in a new anthology of New Music from Armenia, entitled Modulation Necklace (New Focus Recordings FCR244).  On that basis the listener may find on first blush that the New Music component of the subtitle tends to move forward into your listening self first. Only then perhaps does the "from Armenia" part of the title thrust itself into your listening span.

Part of that is that the opening work "Quasi Harena Maris" by Artur Avanesov is tonal but not exactly obviously Armenian in sections of the first listen. With "Novelette" by Ashot Zohrabyan we recognize more of the sort of Armenian syntax we might expect, tempered surely with New Music elements.

And so it goes throughout this interesting collection, onwards to Michel Petrossian's "A Fiery Flame, a Flaming Fire" for piano trio with its sprawling in-and-out of time, stop-and-go, post Serialist diffusiveness conjoined with momentary traces of folkish elements.

A highlight is Artashes Kartalyan's "Tekeyan Triptych" for mezzo-soprano and string quartet. It is haunting, lyrical, rich in invention, at points notably minor-inflected.

Ashot Kartalyan's "Suite for Saxophone and Percussion" takes an idiomatic turn into the special qualities available in a duet of this sort. The soprano sax-percussion interaction is decidedly "jazzy" and nicely so. It is perhaps a bit dance-like as well.

And at the end Avanesov returns with himself at the solo piano for the seven part "Selected works from cycle 'Feux Follets.'" It has an Armenian rootedness at times in its declamatory style.

Taken altogether Modulation Necklace retains relevance and interest throughout. I recommend it for anyone interested in Armenian sounds and New Music from Middle Eastern-Eastern European avenues. It is a most stimulating set.
Posted by Grego Applegate Edwards at 6:34 AM