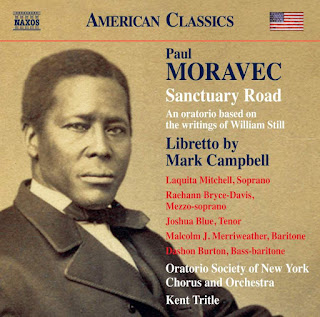 Paul Moravec (b 1957) chose wisely when he decided to pay homage to William Still for his heroic role as a "conductor" and observer of the Underground Railroad and its secret network. Still helped along the safe transport and eventual freedom of more than 900 fugitive slaves. Moravec has collaborated with librettist Mark Campbell in the resultant Sanctuary Road, An oratorio based on the writings of William Still (Naxos 8.559884).

I note with this review post the world premiere performance and recording from the 2018 Carnegie Hall  debut in release just now on Naxos. It gives our ears a representative and spirited indication of the work. After a number of listens I report in to you on my impressions.

Kent Tritle most capably conducts and directs the Oratorio Society of New York Chorus and Orchestra as they mesh with the five vocalists in their respective solo roles. The proceedings were well recorded. Along with a 20-minute discussion that follows, the performance sequence takes up a full CD. There is much music of interest to be explored.

The oratorio focuses on the dramatic, poetic yet matter-of-fact musical setting of Mark Campbell's libretto, which in turn takes its cue from Afro-American abolutionist William Still's detailed and moving documentary writing. Still left us an invaluable and moving record of the circumstances, participants and daunting challenges faced by the brilliantly heroic facilitators of the often perilous operations of the Railroad from the beginning-to-mid 19th century.

Still as an important Underground Railroad "conductor" himself  was eyewitness to a good bit of it from his Philadelphia location. We hear in the oratorio testimonial texts inspired by his writings (principally The Underground Railroad Records) on the biographical situations of those involved, the bold and often brilliant disguises and ruses that facilitated escape to the North, and the extraordinary courage of all involved.

Musically all this takes place in a series of vignettes that alternately collage myriads of participant names, circumstances, places with contrasting, more detailed scene descriptions, including those experiences Still himself had documenting and facilitating while reflecting on it all.

Ultimately a kind of deserved  triumphal "huzzah" concludes the oratorio with the amassed cast.

This is musically a kind of tonal, middle-of-the-road styling, through-composed throughout without vestiges of either Minimalist repetition or High Modernist harmonic edginess. Yet that is certainly not to say that the music is somehow generic. It is not. It is filled with individual and memorable moments more with a black-and-white musical-documentary presence than with multi-technicolor sound emanations. There is a plainness at times that suits the need to recognize the sheer unvarnished drama of the period and its search to achieve abolutionist justice.

The power and clarity of the scoring of vocal and orchestral parts prevails and in the end wins the day.

So I must say there is a kind of rightness to the way the musical content lays out. It is extremely well crafted in musical terms and it sets off the text so that the experience is commemorative, rightly honoring, remembering but of course still providing a history-as-art experience. I come away with a feeling of satisfaction, of approval. You should hear this.
Posted by Grego Applegate Edwards at 8:52 AM