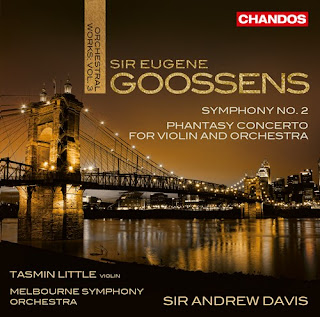 Sir Eugene Goossens (1893-1962) is perhaps generally better known today for his legacy as a conductor than as a composer. Yet a full-blown composer he surely was, as we can profitably hear on today's CD that features his Symphony No. 2 and the Phantasy Concerto for Violin and Orchestra (Chandos GHSA 5193).

Sir Andrew Davis conducts the Melbourne Symphony Orchestra faithfully through the intricacies and bold sweep of the scores. Tasmin Little does a fine job realizing the solo violin part for the Concerto.

The liners to the album give us the details as to his early and full involvement with composition, with  works for orchestra, solo piano, chamber ensembles and eventually several operas. By the time the two works on the album were completed (1942-45 for the Symphony, 1946-48 with a 1958 revision for the Concerto) he was a well-burnished, mature voice, fully formed, a singular compositional force. One occasionally hears an influence now and again--sometimes for example the flute-piccolo writing in the Symphony sometimes reminds slightly of Shostakovich's 7th. But on the whole we get pure Goossens--expanded tonal, Modern, inventive, well orchestrated, an original.

The symphony was largely written while Goossens held down a conducting position in the USA during the WWII years, It is not meant to be programmatic yet it reflects the mood of its time dramatically. It has gravitas.

The Concerto was written in 1945-6 for Jascha Heifetz--who apparently did not favor it so it did not receive proper performances until 1959-60. By then some critics felt that Goossens' music was not advanced enough for the times, sadly, so it did not make a great splash. The recording at hand is apparently the first performance since then. It is a beautiful work that surely deserves more attention and we are fortunate to have this first-rate reading to return to.

Both works have much to recommend them. Neither directly avant garde nor reservedly conservative, these works give us prime Goossens in excellent performances. It turns out that is a very nice thing indeed. Strongly recommended.