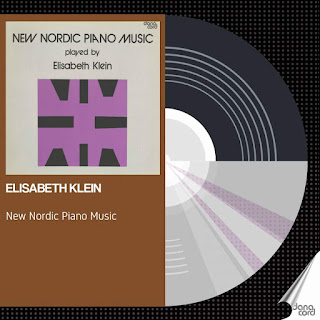 Danacord Records has embarked on a series of re-released albums originally on vinyl in its "From the LP Years" series. One in the initial batch is this fine recording by Elisabeth Klein entitled Nordic Piano Music (Danacord DACOCD 854).

If we think of the piano music of Erik Satie, Bela Bartok, Henry Cowell, John Cage, Morton Feldman, Olivier Messiaen, George Crumb, and Karlheinz Stockhausen (and for that matter Cecil Taylor) as an important subset of examples of 20th century musico-pianistic ways, the phrase "character pieces" comes to mind (to me). Yet I mean that here in the sense that the composers-piano people are in a way important "character actors" in the modern drama of musical unfolding. Perhaps they are more correctly categorized as intensely personal, original piano stylistic vehicles, innovators for what the music has in its note-ful content but also in their own ways developmental brilliances, masters of setting into play unusual juxtapositions of conventional and/or extended techniques.

The eight composers and nine composition sets on the original LP at hand (plus for the CD two bonus works) have something in common with these "personality"-"character" innovators. For nearly all the works have a special personal sound and make use at times of contrasts in conventional and extended techniques plus contrasts in register, etc.

What brings it all together is the wonderfully animated way that Elisabeth Klein realizes each work. It is telling, as the jacket notes inform us, that each of the composers "had a close and intense working relationship" with the pianist. It helps explain how each of the eleven composers appear before us in a fully Expressionistic way, filled with staccato exclamations, dreamy asides, open sonics, spatial significance.

And the way Elisabeth Klein makes the most of the expressive possibilities of each work goes along of course with that close working-out-together mode. It is perhaps a confirmation to read that Ms. Klein was known for her interpretations of both Stockhausen and Crumb. And in her student days she studied with Bela Bartok.

Her career was a full and productive one and we lost a great deal when she left our lives in 2004. As the liners tell us she was a "constant inspiration to composers, urging them to find new ways to use the piano." In addition to lecturing and concertizing in Oslo she triumphantly concertized all over Europe, the US, Israel and Mexico.

This album came about when in 1986 Elisabeth Klein with the help of Danish composer Nils Holger Petersen made a recording at the Hovikodden Art Center in Oslo. Danacord eagerly jumped at the chance to put it out and so the record appeared. Now we have it available again in a fine analog-to- digital transfer. There is much excellence to consider on this album.

The works are quite interesting and the performances stellar. This one is a real sleeper, well worth investigating.