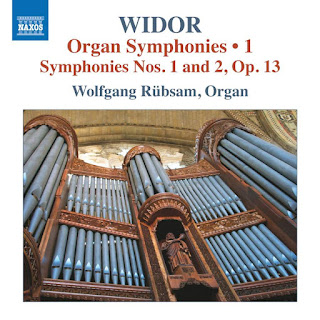 Charles-Marie Widor (1844-1937) did as much to advance the French Organ School as anyone. I am hard-pressed to think of any series of works quite as ambitious (and successfully so) as his Ten Organ Symphonies. His music continues to inspire. Organist Wolfgang Rubsam embarks on a new cycle for us with the inaugural Organ Symphonies 1 (Naxos 8.5741`61) which consists of his Symphonies Nos. 1 and 2, Op. 13.

Christian von Blohn in his thoughtful liners to this first volume reminds us that the Op. 13 works begin the long series of developments in the ten symphonies with regally extended Neo-classical suite-like elements and some vibrant expressions of orchestrational organ sound colors, registrational innovations that of course were to mark off the symphonic series as a whole.

The First Symphony pays homage to Bach from the start. The opening prelude is a most riveting contrapuntal movement that sets the stage for the many swings in color, mood and texture that sets the seven movement work off as already innovative and in the end satisfying. The long and stately "Marche pontificale" stands out as a fine instance of the sort of processional music Widor was undoubtedly called upon to play in the course of services at the Saint-Sulpice in Paris, which he did for some 64 years. The finale forms a fugal high point of the work and sends us off in style.

The Second Symphony has breadth and depth as well even if it is another early example.The long andante rings out on repeated listens and the finale gives us the first of the molto perpetual closings and sounds as exciting as it must have when first performed.

The rebuilt organ at the Rockefeller Memorial Chapel at the University of Chicago sounds grand, as grand as it did when I attended there and experienced its mighty sweep on more than one occasion. Wolfgang Rubsam gives us a very well-balanced reading of the works, measured and well-considered yet as dynamically robust as needed when called upon to burst forth.

It is a promising beginning to the new cycle and a bargain at the Naxos price. Surely recommended. All organ enthusiasts should have the cycle and so too those just exploring the French School for the first time. These opening symphonies stand out after repeated exposure despite how they were the first. Bravo!
Posted by Grego Applegate Edwards at 7:30 AM