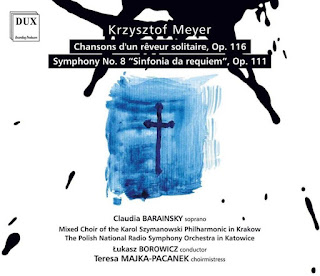 Polish Modernist composer Krysztof Meyer (b 1943) has bit-by-bit commanded my attention on these pages as I gradually have surveyed some notable examples of his music (type his name in the search box above for reviews). What I have covered centers around his chamber output, mostly as a product of what came available for review in years past. Today I am happy to report in on an album of two later compositions for larger ensembles, namely the Chansons d'un reveur solitaire, Op. 116 for soprano (Claudia Barainsky) and symphony orchestra (The Polish National Radio Symphony Orchestra in Katowice under Lukasz Borowicz) and the Symphony No. 8 "Sinfonia da requiem," Op. 111 for orchestra and choir (the Mixed Choir of the Karol Szymanowski Philharmonic in Krakow, Teresa Majka-Pacanek, choirmistress) (DUX 1569).

Meyer studied composition with Penderecki, Nadia Boulanger and Lutoslawski. He had a full career teaching theory and composition in Poland before retiring in 2008.

The two compositions we hear on the current release are revelations, keys to understanding something of later-period Meyer, deeply expressive and heartfelt. They show us a fully original voice, a master craftsman and musical inventor of the first caliber.

The Chansons d'un reveur solitaire, Op. 116 is built upon poetic texts that portray as the title suggests personal metaphorical-experiential journeys taken through memory and feeling, in the end each leaving the subject in an enriched psychic-emotional state. Meyer began work on this cycle with a definite idea of each of the five songs in terms of sound color and dramatic content. Only then did he search for the proper poetic expressions, texts that fit what he was after.

And indeed because of this "pre-selection" the intensely revealing music and its very memorable dialog between soprano and orchestra comes through vividly whether the poetic content is directly grasped or not. There is a musical logic to the unfolding both original and unmistakably singular. Soprano Barainsky and the Polish National Radio Symphony under Borowicz distinguish themselves as they flesh out the exploratory, moody music pleasingly well, as they bring out the special character of each of the five movements.

The "Sinfonia da requiem" makes use of a mixed choir in place of the soprano and maps out somber yet sometimes mysteriously present-ful musical terrain. It addresses expressively and in Modern musical terms the tragedy of the Holocaust, more specifically in recent years the return of antisemitism and a growing indifference to the plain fact of the horror of it all. The holocaust poetry of Adam Zagajewski serves as the textual fulcrum point. Like the chorus in ancient Greek tragedy the function of the choir in this work is as commentator, not as personal witness and confessor as was the case in the Chansons. Instead we engage in the realization of conscience with the emotions brought up and expressed in the orchestra. It is poignant, touching music.

This is a release anyone interested in the Modern Polish and Eastern European scene should hear. It serves notice that Krzysztof Meyer remains an essential voice of today.