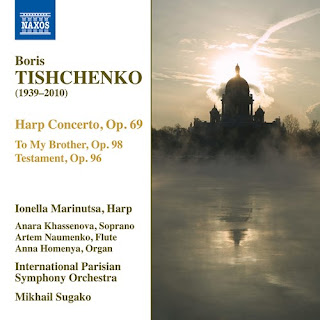 Latter-day Russian Modernist composer Boris Tishchenko (1939-2010) shows us some definite traction on the recent Complete Works for Harp (Naxos 8.579048). It turns out that the whole harp output fits handily on a single 53-minute CD. Happily the music has no shortage of bright moments within a general outline of significant original soundings. It is a good example of why it is important to keep up with the constant flow of forthcoming New Music.

Harpist Ionella Marinutsa comes through with elegance and inspiration, especially for the main event, the 40-some-odd minute "Harp Concerto, Op. 69" (1977) which also brings to our ears nicely the International Parisian Symphony Orchestra under conductor Mikhail Sugako.

The Concerto has a deliberate quality at times, building additive blocks of musical language that owe something to Stravinsky, Varese, Shostakovich and Messiaen in the way they parse out yet the logic of the unfolding and the content is immanently Tishchenko-esque at root. There are especially additive movements among the five and they form critical parts of the musical exegesis. Chamber and orchestral elements combine and interchange in those sections, with smaller instrumental combinations giving way to the larger ones marking climactic increases in density. But then there are various returns of the solo textures throughout and it all makes a special sense. The interplay of solo instruments (especially harp) and orchestral thickets expands in time into an eloquence that holds its own,

The syntax shifts out of the additive mode for a denser texture and sometimes quite virtuoso high expression from harp and orchestra. The fourth movement features an unexpected lyric wordless vocal that nicely alters the mix (and thanks to soprano Anara Khassenova the performance level is high).

The entire concerto rings forward with an originality that feels as Russian as it does cosmopolitan. With repeated listens it takes on a monumental quality and consistently stands out as singular and engaging.

The two short chamber works are songful vehicles for soprano (Khassenova), harp (Marinutsa) and either flute (Artem Naumenko) on "To My Brother,' (1986) or organ (Anna Homenya) on "Testament" (1986). Both are sophisticated yet lyrically engaging and hold listener interest even after more than a few listens.

I found that by the third time through or so the CD began to take on a significance that affirmed the centrality of the New Music universe as a place to witness the bold step forward. It all hangs together increasingly with further passes and serves to remind us why Tishenko has been considered as as a spiritual successor to Shostakovitch. Whatever one might decide (and I have not heard enough to say right now) he shows himself brightly on this program. Bravo! Highly recommended.
Posted by Grego Applegate Edwards at 10:55 AM