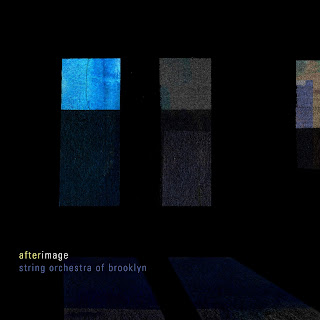 A recurring element in the most Modern of New Music channels I have been calling "the Old in the New," referring to composers of today re-appropriating or being inspired by earlier music in a process that one way or another transforms older stylistic elements into a newly minted kind of Modernity. With the New Year we have another interesting example in Afterimage (Furious Artisans FACD 6823). On it the Brooklyn String Orchestra under Eli Spindel presents the music of Christopher Cerrone and Jacob Cooper--based in whole or in part on music by, respectively, Niccolo Paganini and Giovanni Battista Pergolesi.

The key is what "based on" is all about, naturally. Each work seeks a somewhat different way of transforming the past. As Eli Spindel aptly puts it in the liner notes to the album, both "take as their starting point a single moment from an older work and--through processes of repetition, distortion, and, in the case of [Pergolesi's] Sabat Mater, extreme slow motion--create a completely new soundscape, like opening up a small door into an unfamiliar world."

To open the program Christopher Cerrone begins his "High Windows" by making use of a sampled fragment of Paganini's Caprice No. 6 "The Trill"  for Solo Violin. It forms the initial moment of the extended work for the Argus Quartet and the String Orchestra of Brooklyn. But then the middle section quotes from an earlier Cerrone work ("Hoyt--Schermerhorn" for piano and electronics) and ultimately thrives as an independent composition based on traditional Sonata Form--but also draws connotations from a poem by Philip Larkin about tumultuous youth.

The multi-strandedness of meaning is further underscored as the whole expresses the composer's inspiration from the stained-glass windows of  St. Ann's Church in Brooklyn, the initial venue for which the piece was written and performed. Three separate sections unfold and ultimately have their say.

Ultimately it is all about the musical and personal friendships and artistic commingling that occurred as composer, orchestra, conductor and the original small group (the Toomai String Quintet) involved themselves in the work. Virtually all were initially engaged as both colleagues and friends, then grew into the work in workshops where sections of the score were hammered out.  There followed a further articulation of the actuality of the music through the four public performances that have taken place since the work was completed after that gestation period of 2013. And now of course there is this recording as a further development.

The second and more lengthy of the two works here, Jacob Cooper's Pergolesi-based "Sabat Mater Dolorosa" (2009) is a vast time stretching and alteration/transformation of the original Baroque score to become like a moment stopped in time, like a virtually endless experience of the moment of life departure, like the maternal grief of Mary on the death of Jesus, only de-sacralized to a secular inner being of sorts. The vocal parts for soprano and mezzo-soprano, nicely handled by Melissa Hughes and Kate Maroney, segue with the endlessly pivoting orchestra around sustained progression points nearly stopped in time and space. It is exceedingly beautiful.

Finishing off the program and letting us take stock of what came before are the real-time performances of the fragments involved in the works--the Paganini Trill Caprice (with the solo violin part well played by Rachel Lee Priday) and the single movement from Pergolesi's Sabat (performed by Hughes, Maroney and the SOB). And so we come full circle back to a real-time past after a lengthy excursion through suspended presents, through multiple moments of now.


Posted by Grego Applegate Edwards at 9:04 AM