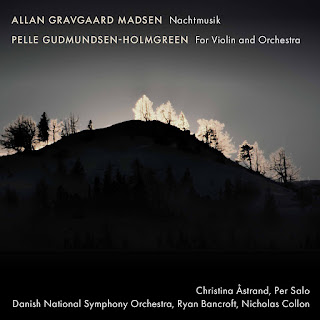 Today we have World Premier recordings of two Danish concertante works from our present century. The first is Nachtmusik by the still young (b. 1984) Allan Gravgaard Madsen. The second is For Violin and Orchestra by the late (1932-2016) New Music master Pelle Gudmundsen-Holmgreen (Da Capo 8.226138). Both are well handled by the Danish National Symphony Orchestra conducted by Ryan Bancroft (for the Madsen) or Nicholas Collon (for the Gudmundsen-Holmgreen). Danish National Symphony concertmaster Christina Astrand gives life to the solo violin part in both works. For Nachtmusik she is joined by pianist Per Solo for the dual role. Both acquit themselves well.

The two works contrast nicely and set one another off.

Madsen's Nachtmusik pivots around a single note taken up in various ways by solo piano, solo violin and orchestra. Gradually as the color of the noting continually shifts other tones are introduced and multiple tempos criss-cross and intersect for a kind of musical mobile. By the second movement a dominant tempo prevails as colors enter and exit dynamically. The brief final movement changes the central pitch and plays delightfully with a diatonic series taken up in turns by all concerned.

Gudmundsen-Holmgreen's For Violin and Orchestra begins with a full chromatic universe of notes taken up by solo violin and orchestra in a tumbling hocket-klangfarben sort of way and then gradually a central sequential motif emerges around which all enter upon and retreat from in time, only to enter upon a more open anarchy of diatonic and sometimes blue note and chromatic extra-tone before returning to the motif again. The solo violin affords a kind of answering to the motif in a dialogic drama. It is tour de force tone painting and affords a lively rejoiner to the particular insistence of Nachtmusik.

In all we get two bird's-eye views of the Pomo Modern Danish concertante possibilities in the present day. Both composers find their own manner of creating a post-Minimalist dialectic between "same" and "different" that does not resort to classical form but instead forges forward each in its own way. Happily recommended for new adventure music seekers.

Posted by Grego Applegate Edwards at 6:57 AM