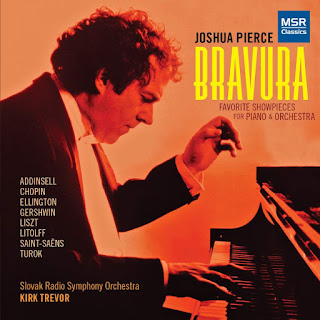 Some albums end up pleasing by way of a number of factors one cannot always predict before listening. Pianist Joshua Pierce and the Slovak Radio Symphony Orchestra under Kirk Trevor give us Bravura: Favorite Showpieces for Piano & Orchestra (MSR Classics MS 1640). It is for me a nice surprise in this way.

It is a matter in this case of a combination of fine performances and an interesting set of repertoire choices. Of the eight showcase works for piano and orchestra there are first of all four 19th Century Romantic staples that have been well appreciated by general audiences over the years--in order of appearance to start off this grouping there is Frederic Chopin's early but vibrant "Variations on Mozart's 'La ci darem la mano'" of 1830. Then there is Saint-Saens' lighthearted little "Caprice-Valse 'Wedding Cake'" of 1885. Next in sequence is Franz Liszt's exuberant reworking of Weber on the "Polonaise Brilliante" of 1851. Finally the program concludes with a charming Henry Litolff "Scherzo from 'Concerto Symphonique No. 4'" of 1852.

If the program merely continued in this vein we would have some bright and bubbly fare, very well handled by Pierce and company. But then there are additions to the program that give it all a slightly different twist. One is a nicely done version of Richard Addinisell's (1904-1977) "Warsaw Concerto" (1941). It is a sort of post-Rachmaninoff-ian splash of Romantic color that was quite popular and often performed in my childhood but rather less played today. It strikes a nostalgic chord with me but then it is worth hearing in this performance regardless.

The three additional works on the program give us a good sampling of bravura 20th century piano-orchestral showpieces that have a pronounced older jazz flavor. One is in a first, world premiere recording, a 1977 Paul Turok composition entitled "Ragtime Caprice."  It has a delightful sort of patina. Then we get to hear a rather luminous version of Gershwin's 1934 "Variations on 'I Got Rhythm.'" which sounds current, fresh and vital in this rendition. Finally and most happily we have a very welcome version of Duke Ellington's "New World A-Comin'" in its orchestral concerto guise, in the final version as arranged and edited by Maurice Peress. It sounds every bit as good as one might hope for, rousing and dazzling, an Ellington evergreen.

In the end the program fascinates and percolates with excellent energy from Pierce and orchestra. It is music that at times is somewhat "light" but that in the best sense of also being fun. It is a pleasure to hear this. Give it a spin and see if it does not coax a smile or two out of you as you listen.
Posted by Grego Applegate Edwards at 10:01 AM