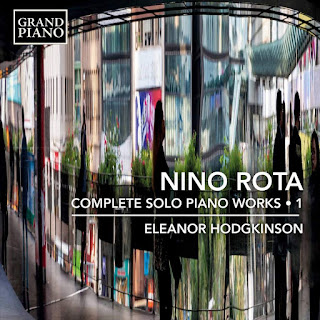 Nino Rota (1911-1979) will ever be remembered by the general public as the composer of the soundtracks for the first two Godfather films. What makes that music so memorable and accessible is its immediacy, emotive strength and melodic-harmonic power to communicate. It is a testament to such communicative directness that he wrote the music for more than 150 films during his 46-year career.

Beyond that vast output we have Nino Rota the composer of Modern concert music. All the elements that made him so effective in soundtrack writing also factor into his non-soundtrack creations. Again the quantity is substantial, with ten operas, music for theater and a full spectrum of orchestral and chamber works.

All this is clear when listening to Rota's inaugural volume of Complete Solo Piano Works 1 (Grand Piano GP827). On it we have pianist Eleanor Hodgkinson effectively holding forth with a good deal of charm for a series of three works--"15 Preludes" (1964), "Fantasia in G" (1944-45), and his "7 Difficult Pieces for Children" (1971).

The music stands out for its masterful workmanship, its creatively playful, cosmopolitan demeanor, its inventive melodic-harmonic stance. Carl Alexander Vincent in the liners for this album rightly underscores the influence of his teachers Pizzetti and Casella in developing Rota's sophisticated experiential approach. Indeed there is a genetic affinity to be heard though Rota comes through in the end as his own voice.

The "Fantasia" has Neo-Romantic elements surely. They are effectively bookended by the Neo-Classicism in the post-Prokofiev "Preludes" and the disarmingly direct "Children's Pieces."

The music grows on one the more one listens so that at the end a cogently satisfying feeling is to be had after assimilating the music with repeated hearings. Part of that has to do with Hodgkinson's no-nonsense grasp of the musical essence of these pieces. Then of course she provides for us direct access to the substantial merit of the music.

Strongly recommended for all who seek to assimilate fully the Modern Italian legacy. I look forward to future volumes!
Posted by Grego Applegate Edwards at 6:31 AM