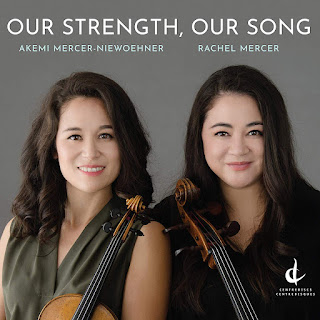 As the world continues to evolve we see much more attention paid to women composers than earlier generations did. Half the world is made up of women after all and equal opportunity-recognition has been long overdue. Today's musical selection, Our Strength, Our Song (Centrediscs 27719) looks at the music of some six Canadian women, three among the living, and two among those who have left us in 2000, one in 2019.

The program is unusual in that all the works were written for the intimate chamber setting of violin and cello duo. They are played beautifully by the sister team of Akemi Mercer-Niewoehner and Rachel Mercer, on violin and cello respectively.

The music stands out for its intensive abundance of musical ideas and a kind of unpretentious purity. All the works have an uncompromising attention to contemporary expression. None would qualify as an encore sort of charmer, though the music certainly has plenty of charm each in its own way. It is music on the composer's terms and all the better for it. It is music that very much suits this duo in its desire to play music of importance and significance. They do.

Of the six compositions featured here there are five world premier recordings and three commissioned works. They span some 40 years of music at the same time as Akemi and Rachel celebrate some 40ish years of life on earth. The two have played together in various guises since childhood so that by this point they are acutely attuned to one another. They give a seamless and intrinsic closeness to the two-part interplay that reflects both the scarceness of such a sisterly length and intensity of musical togetherness but too is a testament to their mutual performative excellence.

Above all we get a chance to experience fine realizations of works by composers some of us might not otherwise know. Violet Archer (1913-2000), Jean Coulthard (1908-2000) and Rebekah Cummings (1980-2019)  head up the earlier contingent with their contrasting Modern Neo-Romantic "Four Duets" (1979) and "Duo Sonata" (1989), respectively (Archer and Coulthard), and the involved anthemics of "Our Strength, Our Song" (2018) by Cummings.

Living women composers of stature chime in with Jocelyn Morlock and her "Serpentine Paths" (2019), Barbara Monk Feldman and her "Pour un Nuage Violet" (1998) and finally Alice Ping Yee Ho and the "Kagura Fantasy" (2018).

Each work explores quite nicely the extensive color and tonal possibilities of a labor-intensive but always supremely musical virtuoso interplay between violin and cello.

The music and performances stand out. They reward a close listening with the sort of deep chamber complexities that mark the best of such things. And it at the same time makes us all the more eager to hear more of Akemi Mercer-Niewoehner and Rachel Mercer.

Posted by Grego Applegate Edwards at 8:21 AM