Andrew Violette, Sonata for the Creation of the World, For Solo Organ 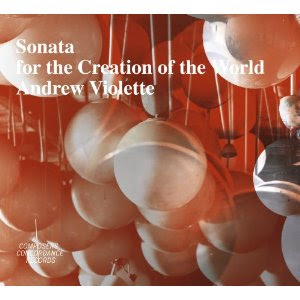 Andrew Violette wrote a monstrously long work for organ, Sonata for the Creation of the World. He performed it last year at the Baptist Temple in Brooklyn, NY. It was recorded and can now be had as a three-CD set on Composers Concordance Records (COMCON6). It begins with some long drones and held chordal blocks, gets moving somewhere around midway with sonorities that show a lineage with Messiaen's celebrated music for the instrument, and then concludes with a lengthy chromatic/diatonic movement that has a chorale feeling to it, though it does not break readily into smaller phrase lengths but rather gives out with harmonic progressions that seem almost infinite. The melodic content becomes more ornate as it progresses and it does have a kind of mystic feeling to it suitable to the genre and programmatic content.

At three full CDs this is a huge amount of music to digest. I've spent nearly a month listing to each section rather intently and in the end I still have not wrapped my ears around the whole. There's so much of it and it would be quite difficult to listen to the whole thing in one stitting. I never did, anyway. The final movement can be downright tiring on the ears.

I come away from it with a feeling that there are parts that appeal to me (the first four movements) and parts that do not because they do not seem entirely coherent and/or digestible (the very long final movement). It will certainly interest diehard collectors and appreciators of the organ repertoire. Whether on listening repeatedly they will become convinced that the whole is cohesive, coherent and justifies its colossal sprawl I do not know. I will leave that up to them. As for me, I may stick to the earlier, shorter movements.
Posted by Grego Applegate Edwards at 4:29 AM