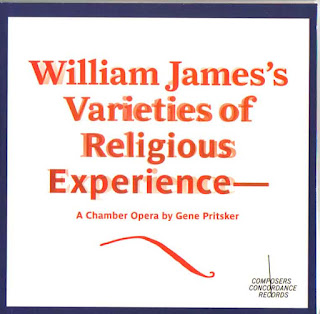 Chamber opera has the advantage of immediacy but of course does away with the "grand" spectacle of a full production. In many ways the chamber format is the ideal medium for Gene Pritsker's William James's Varieties of Religious Experience, the recording of which will be officially released in several weeks (Composers Concordance 007) (but would appear to be available already on the internet, at least as a download). I say ideal because it is a dramatisation and operatic treatment of a lecture given by the American philosopher William James in the early days of the last century. The lecture itself was meant for a small attentive audience and the testimony it quotes from at length describes first hand a number of different lived religious experiences; the intimate nature of the lecture and the disclosures seem best suited for the smaller chamber opera situation.

The nearest contemporary work analogous to Pritsker's Experiences would be to me Michael Nyman's The Man Who Mistook His Wife for A Hat, like Experiences a one-act chamber opera, in this case based on a well received book by neurologist Oliver Sacks describing a rather different set of lived experiences.

As is often the case with Gene Pritsker's music, the stylistic range is broad and the synthesis effective. Like his offshoot work VRE Suite (which I reviewed some time ago on my Gapplegate Guitar site
(http://gapplegateguitar.blogspot.com)
there is a contemporary rock element present in the interlocking parts for two guitars. Then there is the contemporary classical element in the cello & contrabass parts, an operatic and a gospel element in the vocal parts.

All this comes together nicely and memorably in the work.

It is yet another convincing example of Gene Pritsker's originality and distinctiveness as a composer. It should interest and delight those who seek the "new" in new music. This is indeed new!
Posted by Grego Applegate Edwards at 5:13 AM