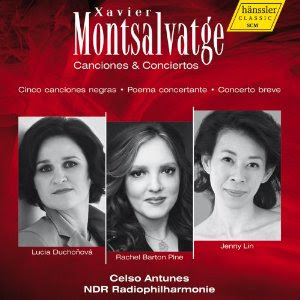 Xavier Montsalvatge (1912-2002) does not ring many bells among modern classical listeners over here in the States. Why his music has not been exported very much I do not know. I only know that I too am not very familiar with his music. So when I had a chance to review the disk produced for the centennial of his birth, Canciones & Conciertos (Hanssler Classics 98.642), I readily accepted. It is a full disk of orchestral songs and concertos. The NDR Radiophilharmonie takes the virtual stage here, Celso Antunes conducting.

From the evidence of this music, Montsalvatge has a somewhat eclectic stylistic range that he occupies with grace. Often prominent is his use of the rhythms and tonalities of his native Spain--Catalonia, to be specific. There is an element of neo-classicism a la Stravinsky present in the "Poema concertante," the "Cinco canciones negras" and "A la espanola," the latter a brief movement from his "Tres danzas concertantes." There is much to like in these three pieces. Rachel Barton Pine handles the solo violin part elegantly for the first work; mezzo-soprano Lucia Duchonova convinces on the song suite.

The final work, "Concerto breve" combines romantic bravura with Spanish rhythms and a touch of the modern harmonic tang. Jenny Lin does a good job with her impassioned pianism, and there are passages that delight the listener with well crafted melodic turns, stirring orchestral tuttis and lyrical atmospheric quietude. The occasional Rachmaninovian piano bombasts to me mar what otherwise is some very interesting, captivating music.

So there is my take. This shows us a very good compositional craftsman with intimations of brilliance. The music is well played and there is little doubt that here we have a modern Spanish composer who deserves to be heard more often.
Posted by Grego Applegate Edwards at 4:40 AM