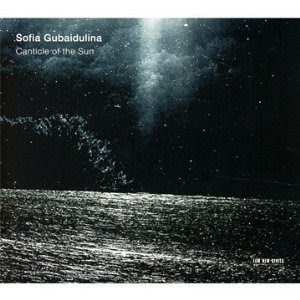 Sofia Gubaidulina is one of the originals of our era. A new release comes to us from ECM this week, confirming and extending that idea. Canticle of the Sun (ECM New Series B0016445-02) presents the title work as performed by the Riga Chamber Choir, Maris Sirmais conducting, with Nicolas Altstaedt as cello soloist plus two percussion and celesta. The disk also features the world premiere recording of "The Lyre of Orpheus" with Gidon Kremer as violin soloist, Marta Sudraba, cello soloist and the Kremerata Baltica.

Both works are substantial, well performed and sound terrific.

Gubaidulina makes a music with much space, ethereal headzone quietude and her own kind of tutti confluence. All the hallmarks of her mature style coexist in both works/performances: "Orpheus," a kind of meditative orchestral piece with prominent violin and cello solo parts; "Canticle," a choral essay combining echoes of Orthodox chant and post-serial expressivity, the old and the new. Ms. Gubaidulina so deftly interweaves such things in her best work. This is part of what makes her one of those great new Eastern European composers to my mind, contemporary in the most current sense.

It is an enthralling set of performances of music that helps define the world we are in.
Posted by Grego Applegate Edwards at 5:04 AM