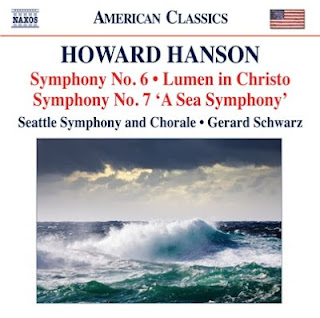 Gerard Schwarz and the Seattle Symphony Orchestra and Chorale give us some nicely done interpretations of all three works on their final volume of his complete symphonic cycle (Naxos 8.559704).

The Sixth has an extended sonority that stands out for its orchestrational brilliance, expanded tonality, thematic dramatics and effective use of the percussion section. Lumen in Christo has some beautifully contemplative passages for chorale and orchestra, flowing, a waystation into Hanson's mature contemplation of the mysteries of his belief and faith, beautifully sung and played under Schwarz's masterful evocation. The Seventh is the symphonic farewell, a symphony of the sea. Hanson works out an encompassing and original harmonic-melodic sequencing, initially stating a thematic cell with quiet juxtipositions of fifths that ultimately deviate like waves breaking their symmetrical linearity, with waves of gradual crescendo and decrescendo for chorale and orchestra that give us a mimesis of the ebb and flow of the sea, of the tides in their ceaseless action. It is a very poetic and moving work.

Those who don't know Howard Hanson's music would do well to start here. Schwarz and the massed forces of the Seattle Symphony give us a modern but romantically empassioned reading of the works in fine sonic spendor. A very fitting capstone to Schwarz's symphonic cycle and well recommended.
Posted by Grego Applegate Edwards at 4:28 AM