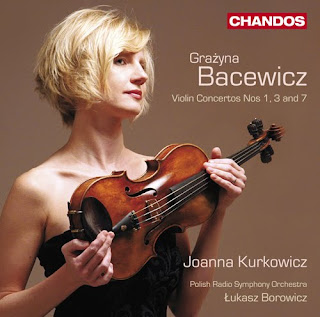 Grazyna Bacewicz (1909-1969), Polish composer of the last century, not well known in the States, returns (see September 13, 2011 posting) to our blog with an additional volume of Violin Concertos (Chandos 10533) as played by Joanna Kurkowicz and the Polish Radio Symphony Orchestra, Lukasz Borowicz conducting. This time out it's the 1st (1937), 3rd (1948) and 7th (1965) concerto, plus an orchestral overture from 1943.

Kurkowicz's playing can be poised and lyrical or firey and tempestuous as needed, the orchestral sound and execution are very good and Maestro Borowicz conducts with elan and authority.

As with the previous volume, the works span the length of her career. The seventh shows the most modern leanings and chromatic intensity, the third a lyrical modernism contrasted with chromatic-diatonic fire--with a very dance-like final movement--and the first showing a more neo-classical style, though expanded harmonically and melodically, and always fully Bacewiczian in sound. The debt to Stravinsky is sometimes apparent; other times, there is a definite originality that makes her stand out.

Taken together the two volumes of violin concertos are a revelation. Here is a composer we should NOT miss--and here are performances that give us many reasons why.

She orchestrates well but the solo violin is nearly always the central focus.

Recommended.
Posted by Grego Applegate Edwards at 4:48 AM