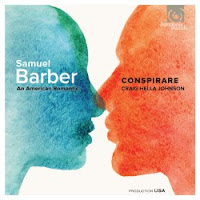 Romanticism in music never had just one form. Beethoven was very different from Schubert. Both were different from Franck. So to call Samuel Barber a romantic is not to say that he was a member of a one-dimensional stylistic coterie. His romanticism was not of the giganticist sort--no thousand member orchestras, no three hour operas. He thought in rather modest ways, with more or less modest resources. And his music was very much his own.

And that wholly original quality is most evident in the new collection of choral works at hand, Barber: An American Romantic (Harmonia Mundi) by Conspirare, directed by Craig Hella Johnson.

This is a wonderfully performed anthology of works well known and lesser known, from the haunting "Agnus Dei" to two world premieres: a new version for chamber chorus and orchestra of Barber's "The Lovers" with poetry by Pablo Neruda, and a new version of "Easter Chorale," both reworked by Robert Kyr especially for Conspirare.

All reflect the very individual sensibility of Samuel Barber at his best--a singing lyricism, a tenderness at times and a singularity of line and overall sound, not lush, a bit more restrained in its passion, but empassioned nonetheless, expansive in compact ways, paradoxically.

Conspirare does a beautiful job with the scores. This is a full disk of masterful Barber, something one should not miss.