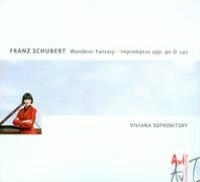 Some of Schubert's most compelling solo piano compositions are represented on the disk at hand: the Wanderer Fantasia and the Impromptus opp. 90 & 142 (Avi-Music 8553250). Viviana Sofronitsky for this recording plays a contemporary copy of a piano made by Conrad Graf (1819), not unlike the one Schubert himself played.

The pianoforte of the era, as most know, sounded quite different than its modern counterpart. It had a more delicate sonority and the upper range of the instrument did not ring out as much because of the way it was made.

Since of course Schubert composed on such an instrument the way he balanced the voicings in the various ranges would have been effected by what sounded best to his ears on that instrument.

Hearing the music matched with the piano sound of the period, in Sofronitsky's sensitive and capable hands, is quite revealing. Upper range passages of thematic importance often get reinforced with octaves or are brought out by a less sonically dense accompaniment. Ornamental passage work in the upper range sounds less imposing than on a modern piano. And the balance of parts in all ranges somehow hangs together with a new clarity.

The music of course is beautiful. Ms. Sofronitsky gives us versions that sing out well within a different aural landscape. And the Graf sound puts it all in a new perspective.