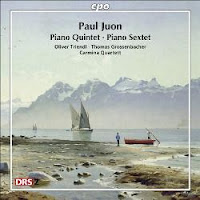 Take a very competent composer who is also very eclectic, change one of his music parameters, and the results can be disarmingly original. That is the case with Paul Juon (1872-1940), at least with his Piano Sextet/Piano Quintet (CPO 777 507-2) in a recent recording by the Carmina Quartet and guests.

Born of German extraction, Juon grew up in Russia, showed early-on a talent for music, attended in due course the conservatory in Moscow, studying with among others Arensky, became a full professor at the Berlin College of Music some time after 1905, spent some time in prison camps during the first world war, and died in 1940 after an early retirement. Those are the biographical basics. During much of this time he composed, of course, and it is with that we are concerned today.

To return to the initial thought, Paul Juan's Piano Sextet, op. 22 and his Quintet, op. 44 are in many ways quite reminiscent of Brahm's chamber works: lushly harmonized, richly thematic, thickly scored, romantically impassioned. There is a touch now and then of a Russian flavor, especially in the themes that have a dance-like quality and are in a minor mode. If that's all there was to his music, he would be a competent, solidly craftsman-like romantic of his era, and that would be that.

But there is that important parameter alluded to above. In both these works Juon uses meter in unconventional ways. Odd meters and shifting meters are used a good deal in these works. When coupled with the sometimes stately, sometimes dance-like nature of his themes, the results are quite interesting.

The use of meters makes for a decisively novel effect upon the listener. This may be highly eclectic music in many ways, but it comes across as a music of difference.

Does that mean that Paul Juon is a forgotten master, worthy of placement on a pedestal, destined to be enshrined with the past great maters of music composition? No. Not on the basis of these compositions anyway. But with the energetic, enthusiastic treatment of the Carmina Quartet and guests Thomas Grossenbacher (cello) and Oliver Triendl (piano), we can while away 71 minutes now and then, listening to two works that manage to give pleasure and fill ones ears with music of an unusual, worthwhile sort.