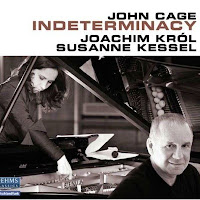 The original recording of John Cage's Indeterminacy came out as a two LP set on Folkways some time, I believe, in the late '50s. The piece, then and now, centers around a series of short, mostly autobiographical texts penned by Cage (and for that recording recited by him) describing his music, incidents in everyday life and Zen moments of one kind or another. It was performed simultaneously with "Solo for Piano" (1958), the solo part from his "Concerto for Piano and Orchestra" and his electronic work "Fontana Mix" (1958). David Tudor played the piano part for the recording.

Pianist Susanne Kessel and recitator Joachim Krol have created a new version of the work (Oehm Classics OC 855) as part of the celebration of John Cage's 100th birth year. The individual text vignettes have been translated into German by Martin Erdmann and Krol reads from them in an order dictated by chance.

Susanne Kessel realizes the piano part with imagination and sensitivity. The part itself calls for a good bit of musical decision-making on the part of the performer and Kessel creates a version that is stylistically exploratory and timbrally diverse, via playing conventionally and inside the piano in various ways. Both the piano part and the electronic score are present in the audio mix at various times according to a chance operation set in motion by Susanne Kessel.

In the end there are various moments in the performance where the recitation (in German) proceeds by itself, where it is joined by parts from either "Solo for Piano" or "Fontana Mix," or in some cases both.

The piano part is angular and abstract as is the electro-acoustical sound piece. They weave in and out of the recording against a constant wave of recitation.

I have become quite familiar with the original recording. This version rivals the original in every way. The piano realization is different enough, and entrance and exits of both it and "Fontana Mix" vary with the recitation as to make it a new variant of the work, and of course the text, well-performed in German by actor Joachim Krol, gives the aural experience a different dimension.

Those familiar with German will get all the gentle humor and irony contained in Cage's text. Those who are not will experience it as a third part of the abstract sound event.

In the end Indeterminacy well represents Cage's middle period, where he first confronts composing and performing according to the dictates of chance operations. It is not perhaps in the ranks of Cage's most essential works. The performance at hand has the advantage of a state-of-the-art digital sonic staging over the original recording. Susan Kessel's realization of the piano part is excellent, and certainly rivals that of David Tudor's.

After all these years, this is a work that is still as avant garde as it is stubbornly wayward. It still no doubt may perplex, frustrate, even anger unprepared listeners. But for those initiated into the Cagean philosophy and manner of presentation, it remains a piece to fascinate and intrigue.