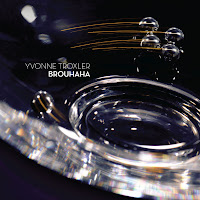 If you want your music performed regularly and with care, it's never a bad idea to form your own ensemble. That's what Yvonne Troxler did in 2000. Glass Farm, as named, is still going strong and both the ensemble and her work are well represented on their second Innova disk Brouhaha (Innova 835).

The CD gathers together five of her recent chamber compositions: "Penn 1," "Shergotty," "Brouhaha," "Susurrus," "Kaleidoskop." All occupy modern territory with their own integrity. Most importantly, Ms. Troxler has traveled along her own path and found her own voice, in music that doesn't lack passion but seeks to explore sound and note parameters with originality. Classical high modernity lurks in the background as the trunk from which she branches, and the growth is strong and healthy, so to speak (pardon the mixing of metaphors). I especially like the agitated excitement of "Kaleidoskop" and its well thought-out interplay between voices.

Troxler shows eloquence, memorability and inspired craftsmanship in this round of chamber works. Glass Farm is a superior performance vehicle that excels in realizing the music. That's a terrific combination and this album brings lots of pleasure!