Justin Rubin, A Waltz Through the Vapor 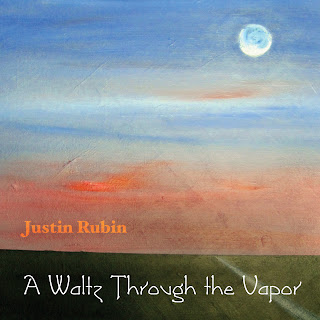 Justin Rubin teaches and resides in Duluth, Minnesota. His experiences there, natural and social, have something to do with the chamber music heard in his second album, A Waltz Through the Vapor (Innova 847). The lived-time of place as influence follows in the case of many composers, and in this instance as elsewise, the results are what we seek.

Here they are quite noteworthy. The magnetic center of the music and its performance on the album rests with pianist Matthew McCright. He gives dramatic, poetic life to the fair number of piano solo pieces included. There are also works that require larger forces. There's one for bassoon, marimba and piano, one for flute and piano, and two for cello and piano. For those, other pianists take on the parts, and do a fine job at that. Piano remains central as an element in the music at hand, at any rate.

The works tend to be short, evocative, textured somewhat densely and harmonically in the late romantic-early modern camp. There's the sort of rolling expressivity you can hear in Ives, Sorabji, Scriabin, only personalized as Rubin-musique.

The performances, especially those by McCright, are warm, impassioned but also precise and detailed.

This is music that sticks in the mind after a while. It is a program of well-paced chamber music that has density and drama, that has memorable content. Listen to the familar yet transfixed Variations on "There Were Three Ravens" for flute and piano as a good example. The familiar (in this case the Renaissance theme) combines with the inventive in ways that stand out. Justin Rubin has that knack. A Waltz Through the Vapor puts it across very well.