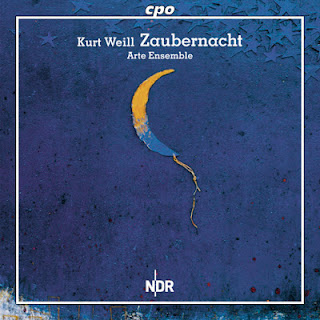 The original orchestration for Kurt Weill's Zaubernachte (Magic Night) (1922) for soprano and eight chamber musicians, was lost for 80 years, rather miraculously turning up in 2006. A critical edition of the score was subsequently made available. The Arte Ensemble has made a full recording with Anna Vegry in the brief soprano role (CPO 777 767-2) and the CD is now available in the States.

Zaubernachte was written as a children's pantomime and thus has a literal fairy-tale sort of story line the music goes along with. The original scoring includes string quartet, winds, percussion, piano, a kind of miniature orchestra well-served by Weill's score.

The music is typical of Weill in the earlier period in that there is a bit less of the vernacular ragtime/jazz/cabaret influence than later on. This music is nonetheless quite playfully lively, in an almost neo-classical vein but with the tang of the modern on the palette.

Fact is, it is music that delights in every way. The Arte Ensemble gives a detailed, perfectly idiomatic performance that sounds great on disk.

This will be manna to Weill enthusiasts (like me). And it is fully engaging as a work in its own right. Those who are delighted by such things as Stravinsky's "Tango" (and who isn't?) in its chamber version will fall right in with this music. It's pure charm!